A Conversation With Kevin Major 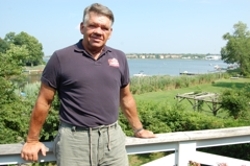 How did you become the voice of the Whalers?
Well, there are two of us. I do the games here in Sag Harbor. I was at work one morning and I got a call from Sandi Kruel. I believe it was Sean Crowley who suggested they talk to me or to Richie Decker. And Richie couldn’t do it. It’s just the voice. We both have that deep voice that makes for good announcing.

Have you ever done anything like this before?
Never. Did I ever want to be the guy from the Yankees?  - Of course. Bob Shepherd is a mainstay at Yankees games. I think everybody in the announcing business has tried to imitate him at one point or another. ‘Good afternoon and welcome to Yankee Stadium for today’s game featuring the Baltimore Orioles and the New York Yankees.’ He’s a historical figure in New York,

So you’re a big Yankees fan?
I went to my first Yankee game when I was five years old. That’s a good story. I was five years old and in first grade. I was an early starter.  My father took me out of school to take me to a Yankee game. I was a big Yankee fan even at five years old. I was a Mickey Mantle fan.
The voices on the radio were Mel Allen and Red Barber. Mel Allen was my favorite because he loved Mickey Mantle, but as I look back, Red Barber was probably the better announcer. He knew more about the game.

What’s you personal experience with the sport?
I played as a young boy. We didn’t have little leagues. Where I lived we had Catholic Youth Organizations.  I played for my Catholic school.  As far as regular baseball, that was the extent I played. In high school I played basketball and football. But baseball has always been my love. Even today I still play softball.

What do you think about the Whalers making it into the playoffs?
They’ve come a long way. You’ve watched them meld over the summer. I think about [manager] Julio [Vega]  and the job he has done. In one year they have a team that’s going to the playoffs. It says a lot about the kids and the direction they’re receiving. Everyone knows the first year of doing anything is difficult.

What are some of your most memorable moments of the season?
The first time I saw them play, Alan Parks stole home and threw a guy out from right field. It was a line drive, right on the button. When you see that as a baseball fan, you know you’ve got something special. That’s what really got me going as a fan. That’s what grabbed me. I saw this was legitimate baseball in my mind.
Then there was the Phil Kline perfect game, and when I introduced Dan Reiser as a hometown boy. I’ll never forget that.

Was that the first perfect game you had even seen?
Absolutely, in person that was the first time. I had seen one or two on television, but even then I don’t think I saw the entire games.
At one point, I think we were around the sixth inning and Andrew looked me and said, ‘Do you know what is going on?’ and I said,  ‘Of course.’ But you know, we couldn’t say anything. That’s not something you can talk about when it’s happening.
The last play of the game was a comebacker, right to Phil. When he made the out, I remember saying for the first time in Hampton Whaler history a pitcher had thrown a perfect game. Then I found out not only was it the first time for the Whalers, but it was the first time in at ACBL history and that’s 42 years. That’s pretty impressive

Did you know about Rusty’s plans for the Whalers before you were asked to be the announcer?
I knew of the Whalers because I was invited by Tom Gleason to the first committee meeting. I had met Tom and his wife at a business function for real estate. I’m a real estate agent. We got to talking, and I’m on the Little League board and he was telling me about the clinics. He said part of the plan was to put on these clinics, and asked if that was something I’d be interested in and I said of course.
My total focus was what it could do for the kids. That was my reason for being there.

What has it meant to the kids?
It shows them that as they mature, their skills can get much, much better. I wanted to point out that these young boys are using their kids in part for education.  To let them focus on these guys as someone they can look up to  - I know my son Bo talks to Mark Houck like he’s his older brother.

Is Mark his favorite player?
Well, Bo likes everybody. He was thrilled with Phil’s perfect game.  He got a baseball signed by him and he keeps it in his room downstairs. He really understood what was happening. He is very proud to be associated with the Whalers. They’re his team.