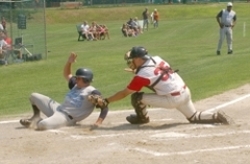 Hampton Whalers’ manager Julio Vega said he was excited his team, after winning three of their last four games of the regular season, fought their way into the Atlantic Collegiate Baseball League playoffs. But he knew they had it in them the whole time.

“I think we’re playing the way I expected the team to play all summer,” said Vega. “But sometimes you don’t get what you want.”

All season long the manager has praised his teams’ pitching. But the bats have been lack luster. That is until of late.

“For the whole summer the pitchers have been giving the offense a chance. They keep us in the game no matter what,” he said. “And lately our offense has been getting big time hits in key situations.”
In the beginning of the year the Whalers lost a lot of close, one-run games. Now, they’re winning those close games and it couldn’t be happening at a better time.

Last Friday they hosted the Peeksill Robins in a twin bill at Southampton. They won the first game, 2-1, and lost the second, on a questionable interference call in extra innings, 3-2. After the tough loss, Vega told the team to put the game behind them and concentrate on the next two. That’s exactly what they did.

On Saturday they again hosted the Robins in another doubleheader, but this time at Mashashimuet Park. They were down 2-0 early but came back to win, 3-2. In the bottom of the fourth, first baseman Andrew Wernicki belted an RBI-single put the Whalers on the board. Then in the bottom of the fifth, Kyle Crean hit an RBI-single and Alan Parks scored on a balk to put the Whalers ahead for good.

In the second game on Saturday, the Whalers again squeaked out a close win, 1-0. Gardner Leaver from Rhode Island University pitched a complete game shutout. The Whalers only run came off a Chris Walker RBI in the bottom of the first inning. From there Leaver and the Whalers defense finished the job and kept the Robins at bay.

The Whalers will host the Peeksill Robins again, this Sunday at Mashashimuet Park in a one-and-done playoff game. The winner will go on to face the Metro Cadets, the first place team in the Kaiser Division. The Whalers are 2-2 against the Cadets in regular season play. But Vega is more concerned with the Robins at this point.
“They’re going to be a little mad that we just beat them,” said Vega. “But our pitching staff is ready to go. Obviously we have the better team since we just beat them three out of four.”

Vega said with the way his pitchers have been throwing, he’s not afraid of playing anybody in a one-and-done scenario.

The Whaler’s ace, lefty Andrew Gurassi from New York Tech will take the mound on Sunday. Vega said it’s hard, because he could pick just about anybody to throw. But it’s a strategic decision. He said Peekskill struggles against lefties.

He said the overall mood of the team is positive and they’re glad they’re still playing late into the season.

The Whalers host the Robins this Sunday at 4 p.m. at Mashashimuet Park. Jerry Seinfeld is expected to throw out the first pitch.

Top Photo: Whalers’ Karl Derbacher gets tagged out at Home during 7/26/08 game against the Peekskill Robins at Mashashimuet Park.