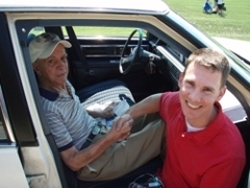 My dad, Sal Vacca, will be 92 in November. He loves baseball. This past spring his chiropractor, Dr. Stephen Petruccelli, told him of a college baseball league that would be playing several doubleheaders in Mashashimuet Park in July and gave him a schedule. Dad made copies of the schedule and excitedly told everyone he knew about the games.

In mid May Dad lost his appetite for food. Toward the end of June he was rushed to Southampton Hospital, where he had emergency surgery to remove a blockage in his intestine. A week later he was transferred to the Hamptons Rehabilitation and Nursing Center. After 12 days of rehab he was rushed back to the hospital because of an infection.

He remained in the hospital for a week, and then returned to the rehab center. When I visited him he said, “I don’t think I’ll be able to see any of the games. Maybe you can take a few pictures of the field for me.” Last week, when I showed him eight pictures of the empty baseball field from all angles he smiled, got a little animated, and thanked me.

I knew the final doubleheader would be played this past Saturday and spoke to the head nurse at the rehab center about the possibility of taking Dad to the game. She said she’d have to clear that with his doctor and physical therapists and did. The plan was he’d view the game from the car. When I told him he asked, “Can we park on the third baseline?”

Since the third baseline is off limits for vehicles, I informed Dr. Petruccelli of Dad’s request. “Don’t worry,” he said. “I’ll take care of it.” And he did. When Dad and I rode to the field with our chocolate malteds, Sandy Kruel opened the gate to the third baseline and welcomed Dad as if he were a celebrity. From that moment on he got VIP treatment.

In between games several people stopped by to pay their respects. When Dr. Petruccelli informed the Hampton Whalers team that Dad had played town team baseball in Mashasimuet Park in the late Forties and early Fifties against the Bridgehampton White Eagles and Carl Yastrzemski, a few of the players came over to the car to chat with Dad.

While Dad and I watched the game he said, “You grew up in this park.” Images of me dragging Dad out of bed and begging him to take me to the park for batting practice flashed through my mind—just father and son with five baseballs and a bat. He’d pitch the balls, I’d hit them, and then we’d retrieve them together while he evaluated my swing.

Dad was an innovative teacher. He drilled a hole through a baseball, attached it to a nylon string, and tied the other end to a beam in our garage. The ball hung waist high. He made a lead bat and placed a mattress against the wall.  I’d eagerly smash the ball as hard as I could. The ball thudded into the mattress and swayed back for another hellacious rip.

Dad loved teaching me the strategy of the game while watching the Yankees play on TV. He tested me again. “Men on second and third, two outs. The batter grounds to the third baseman. The runners take off.  The third baseman fields the ball and tags the runner coming from second after the lead runner has crossed home plate. Does the run count?”

“Yes. There was no force out. If there was, the run doesn’t count because even if the third out is a tag play, the force was still on.” He smiled proudly as if to indicate that he had taught me well. Skull sessions like this cultivated my instincts in baseball to such a keen degree that I always knew what to do before it happened—a valuable skill in real life too!

As we viewed the game he said, “I appreciate your taking time out of your busy day to bring me to the game.” When we cruised out of the park, passersby waved goodbye. I drove him back to the rehab center, and then called his sister, Norma Esposito, his sister-in-law, Madeline Vacca, and my sister, Rosemary Ward, to share Dad’s glorious day.

Dad has never had a bad word to say about anyone. Everyone who knows him respects him. Mom and Dad never missed a game when I played, and this past season Dad rooted for Coach Petrie at all the East Hampton basketball games. Dad has lived his life by the Golden Rule and whether that’s a life of 92 years or 22, quality time is all that matters.

Dad, Rosemary, and I are grateful to all the beautiful people who have visited Dad, sent cards, and called to convey their concern and best wishes. We wish everyone quality time in everything you do. If only the entire world could bless themselves with a few moments to smell the roses in their own way every day, we would all know joy and peace on earth.