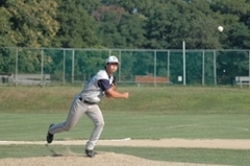 After starting the season with six straight losses and spending most of the summer at the bottom of the Kaiser Division standings, the Hampton Whalers mustered six wins in their final seven regular-season games to not only clinch a playoff berth, but probably a home playoff game, and maybe even a division title.

Playing in their debut season in the Atlantic Collegiate Baseball League, the Whalers won three of their last four games against the Peekskill Robins, splitting a doubleheader in Southampton on Saturday and winning both games of another doubleheader at Mashashimuet Park in Sag Harbor on Sunday. The series win improved their regular-season record to 19-21 and moved them into second place in the division.

The Robins are now 18-21 going into their final regular-season game against the Metro New York Cadets tomorrow in Peekskill, N.Y. If they lose, they are likely to face the Whalers at Mashashimuet Park on Sunday at 4 p.m. for a do-or-die playoff game. The Whalers won five of eight games against the Robins this summer, the most important, of course, coming this past weekend.

“It was really fun these last couple of weeks,” Julio Vega, the Whalers’ manager, said on Monday. “Instead of having our guys ready to go home, they were excited to play good baseball, striving to get where they were supposed to be.”

What plagued the Whalers earlier in the season — failing to provide their superb starting pitching with enough run support — seemed to be overcome down the stretch. At times, the starting pitching, which Vega has repeatedly called “the best in the league,” was so good it needed just one run.

Then there have been times when the offense lived up to its potential. The Whalers scored 10 runs against the division-leading Cadets on July 13, and beat the Long Island Mustangs 9-3 on July 22. That win moved them into third place, ahead of the Mustangs, who had maintained a narrow lead for most of the season. Going into yesterday’s season finale with the Cadets, Long Island’s record was 17-22.

In the first game on Saturday in Southampton, Andrew Guarrasi struck out 12 batters and allowed five hits and two runs in seven innings to lead the Whalers to a 2-1 victory. The only run Guarrasi gave up came in the first inning on a two-out r.b.i. single by Peekskill’s Brock Whiteman.

Alan Parks hit a solo shot to tie the game in the bottom of the inning and Mark Houck drove home Chris Walker on a sacrifice fly for the go-ahead run in the fourth. Walker had reached on a leadoff double. The win was Guarrasi’s fourth in six decisions this season and lowered his earned run average to 1.70, which is the fifth best in the league.

In the second game on Saturday, David Leon drove home the game-tying run in the seventh inning on a two-out single. The Whalers and Robins played into the 10th inning, when a controversial call ended the home team’s bid for a sweep.

Down 3-2, with Leon on third and Parks on first, Tom Coulombe hit a ground ball to the shortstop, who threw to second for the second out. Coulombe beat the throw to first, but Parks was called for interference with the second baseman.

“He blew the call,” Vega said. Had Parks not been called for interference, the tying run would have scored and the inning would have continued. “Because of that call, we had to win both games on Sunday, otherwise we could have been out.”

On Sunday, the Whalers made sure not to spoil their late-season rally to make the playoffs. In the first game, Klein, whose e.r.a. was .95 when he took the mound, went six innings, giving up eight hits, two runs, and one walk. Thanks to a two-run Whalers sixth, he left the game with a 3-2 lead. Mike Connors picked up the save with a perfect seventh.

Kyle Walker had two hits on the day, and Kyle Crean and Andrew Wernicki each had a hit and an r.b.i. Crean’s .311 batting average and Wernicki’s .280 led the Whalers this season. Klein’s two earned runs raised his e.r.a. to 1.23, still the lowest in the league. He finished the season with a record of 5-2.

Leaver saved his best performance of the season for the most important game. He was throwing a no-hitter into the sixth before allowing a one-out single. The one run the Whalers scored in the first inning was the only one Leaver needed. His record improved to 2-3 on the season, which he ended with an e.r.a. of 2.92.

Leaver, Guarrasi, Klein, and Leon, the shortstop, played in the A.C.B.L. All-Star game on Monday at Jack Kaiser Stadium at St. John’s University in Queens.

Now that the Whalers have made the playoffs, Vega said, their focus has shifted to winning a championship. “It was harder to get into the playoffs being in the position we were in than it is to win a championship once you’re in,” he said. The manager was proud of the way his team finished. “We didn’t seem like a team ready to go home.”

“I couldn’t have written the ending any better myself,” Rusty Leaver, the Whalers’ president and founder, said on Monday. “Having the last pitch of the season be meaningful is all we could ask for. Our goal this year, which was lofty, was to make the playoffs,” he said. “We accomplished that.”

Leaver said that his intention is to expand the league to include four franchises on the East End, adding one from Southold, one from Riverhead, one from East Hampton.

The Whalers went 10-1 in Sag Harbor, where they are likely to host the first playoff game.