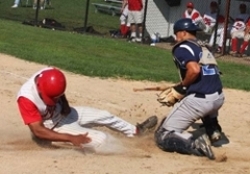 Sag Harbor - Just three weeks ago, the Hampton Whalers were down and way out. They’d just squandered a suspended game, at 7-15, against Long Island to all but write them off for the Atlantic Collegiate Baseball League postseason. Trying to keep their heads up, they couldn’t help but notice the teams a mile ahead of them in the Kaiser Division standings.

As it turns out, to have counted the Whalers out was a mistake many made. Whalers Manager Julio Vega said over and over his team was better than their record, and they used the rest of July to show it. By winning three of four games in a weekend series with Peekskill, including two nailbiters on Sunday, they fought all the way back to clinch a postseason berth and a home playoff game, to be played in Sag Harbor either on Sunday afternoon.

At 19-21, the Whalers lead the division in wins but must wait for the rest of the league to play their games pushed back because of rain. Barring a collapse in the final week, Metro N.Y. (18-17) will likely seize the top spot and thus a first-round bye. Provided the Cadets finish first, third-seeded Peekskill (18-21) will visit Mashashimuet Park for one game, as they cannot finish with more than 19 wins and lost the season series to the Whalers, five games to three. The winner of that contest advances to St. John’s to begin a three-game set with Metro to decide the division.

“I kind of knew we had a good team,” Vega said. “I knew we had it in us. We just needed to start playing good baseball.”

How close was it? Six of their last seven games were decided by one run. The Whalers won five of them. In those five wins, they tallied just 11 runs. Their hitting has been timely not only within the game but as the pressure to win has increased.

“These are must-win games for both teams,” Vega said. “It’s tough to come out there and win when you’re not playing loose. Usually good teams, when in tough situations, just play. That’s what we did. We probably played the best we’ve played – pitching, defensively and offensively.”

To secure a spot, the Whalers needed to win the second leg of a doubleheader on Sunday. In game one, a strong, albeit human, effort from Phil Klein, he of the perfect game from two weeks back, proved to be good enough for a 3-2 victory. It was then up to hometown hero Gardner Leaver, who starred at East Hampton from 2004-2007, to lock up a home date this weekend. Leaver pitched, in Vega’s opinion, “probably the best he has all summer.” The Rhode Island sophomore pitched 5 1/3 no-hit innings before giving up a Blake Cover single in the sixth. Leaver then stranded a pair of runners in the seventh, inducing a double play to end the game. He finished with four strikeouts.

“He pitched great,” Vega said. “He looked like he did the first couple times he was on the mound. He was smooth. He had probably the best slider I’ve seen him throw all summer, he kept his miles-per-hour up the whole game and he got ahead of hitters.”

All the run support he needed came in the first inning when, after Karl Derbacher made an out, Alan Parks reached base on a single. The right fielder from Charlotte, a catalyst for the team all season, was off to the races from there, stealing his 21st and 22nd bases. As he stood at third, Chris Walker drove him in with a groundball. Leaver and the Whaler defense took it from there.

Klein gave up the first runs in Sag Harbor that he had all season, surrendering two in six innings. In a hole, the Whalers managed to eke out three runs, plating one in the fourth and two in the fifth, which proved to be just enough to give Klein his team-best fifth win of the season. Andrew Wernicki was responsible for the first, driving in Tom Coulombe with a single. Kyle Crean singled to tie the game in the fifth, and a rare balk brought home Parks from third with the go-ahead run. Mike Connors, who went four innings the previous day, tossed a hitless seventh for his third save of the year.

On Saturday in Southampton, even a split seemed like a letdown, considering they won game one behind Andrew Guarrasi and had the nightcap within grasp. Guarrasi was virtually unhittable after surrendering a run in the first inning, yielding just five hits while striking out a dozen Robins in seven innings of work. Meanwhile, the Whalers’ ability to put the ball in play paid off with just enough production. In the bottom of the first, Parks smashed a Matison Smith offering over the right field fence to tie the game. With the game still knotted at one in the fourth, Captain Mark Houck, Jr. lifted a sacrifice fly to center to bring in Walker, who had led off the inning with a double.

The Whalers haven’t been tearing the cover off the ball, but they’ve been delivering in clutch at-bats of late, a rarity in the season’s early going. Last Sunday, Wernicki singled with two outs in the seventh to plate the game’s only run against Jersey; in game two, the Whalers scored two runs in the sixth and seventh innings to erase a 3-0 deficit and win 4-3.

“We get on base, we bunt a little bit, run and we steal,” Vega said. “That’s our game. If our pitching can pitch like they’ve been pitching, when it comes to playoff games, you have to win those 2-1, 3-2 games when you’re facing their best pitcher.”

The Whalers got an early taste of playoff baseball, winning a series of contests to keep their season alive. They’ll have to do the same beginning this weekend in Sag Harbor.

“Every situation is a big situation,” Vega said. “Our guys played great this weekend. I couldn’t have asked for anything more.”