Mr. Perfect: Whalers’ Klein Has Done Everything Right On The Mound 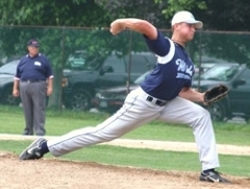 Sag Harbor - He’s used to the looks. Most people see Phil Klein, a 6-foot, 7-inch kid with an athletic build, and imagine the ease and force with which he can slam dunk a basketball or reject an opponent’s shot attempt.

“That’s how the conversation always goes,” said Klein. “They ask me if I play basketball, and I say ‘nope.’ ”

He’s had the exchange countless times. Yes, he has played organized hoops. Yes, he can dunk. Phil Klein, however, is a pitcher, and in his short stay on the East End as a member of the Hampton Whalers baseball team, he’s shown he’s a darn good one.

This weekend, the Whalers play four games against Peekskill for the right to play in the Atlantic Collegiate Baseball League postseason. The Whalers need to win three. If they’re in a win-and-we’re-in situation on Saturday night at Sag Harbor’s Mashashimuet Park, where crowds have flocked to see the first-year club, it’s Klein who will be handed the ball. In two short months, he’s gone from unsure to a fixture in the rotation, one who will almost certainly deliver.

“When he lets go of the ball, it’s explosive,” Whalers Manager Julio Vega said. “The more innings he gets and the more he develops, the more consistent he’ll be. He’s only a freshman, but I think in a year or two, he’ll definitely be a draft pick for somebody.”

Through six starts with the Whalers, Klein has been nothing short of spectacular. In going 4-2, he’s posted a league-best 0.95 earned run average. In 38 innings, he’s surrendered just 19 hits and 10 walks while striking out 38. Extract his four-inning five-walk loss to Long Island in the Whalers home opener, and Klein’s numbers are even better. In his 34 innings since, the right-hander’s ERA shrinks to a microscopic 0.79, having given up just three earned runs in that span. The stretch includes a 19-inning scoreless streak at Mashashimuet Park in which he’s yielded just five hits.

Most memorable of all was what’s gone down as the greatest performance in the 42 years of the ACBL. In game one of the Whalers’ doubleheader sweep of Metro N.Y. on July 13, Klein set down all 21 Cadets that he faced - six by way of the strikeout, to record the first perfect game in league history. To cap his masterpiece, he mowed down the top of the Cadet order 1-2-3 in the seventh, stabbing Frank Esposito’s grounder back up the box and throwing to Andrew Wernicki for the final out.

Klein, fresh from being mobbed near the mound by his teammates, summed up the experience in one word: “outstanding.” Klein had thrown no-hitters at Gahanna Lincoln High in Gahanna, OH, and with the Ohio Rattlers, his summer team a year ago. However, he had never gone through a game entirely unscathed. The perfect game, along with his performance since the outing, is just the boost he needed going into his sophomore year of college ball at Youngstown State.

“I’m getting back to where it feels more like high school for me when I was dominant,” Klein said. “I’m picking up a little swagger where I know I can compete with these guys. I strayed away from that my freshman year.”

Living And Learning
Klein grew up just five minutes from the Ohio State University campus. “I really wanted to go there,” he said. With a fastball that topped out at 83 or 85, the Buckeyes’ recruitment of their hometown kid was light. Klein opted for Youngstown State. In his first season with the Penguins, he was plagued by control issues, which ultimately cost him a spot in the team’s rotation. Over 18 2/3 innings, the freshman gave up 22 hits but more importantly handed out 19 free passes. That led to an 11.09 earned run average. There were bright moments, not the least of which was a 6 1/3 inning gem in Youngstown’s 6-1 win over Xavier on March 13, but the season served mostly as a lesson for Klein.

His expectations were realistic going in; he wasn’t the first and isn’t the last to experience growing pains at the college level. Distance from the matter has allowed Klein to assess his situation. At the root of his wildness was getting away from his fastball, which, when in the mid-to-high-80s ball is all the more problematic for hitters due to Klein’s lengthy stride to the plate. Instead of establishing his heater and working off it, he was throwing an abundance o breaking pitches.

“I got out of my routine,” Klein said. “It was a little test for me. That’s why this summer was real big for me. I needed to gain confidence for when I go back to school so next year I can keep it going.”

His work with Pitching Coach Joe Shortt has been less about mechanics than his physical fitness; logically, if Shortt altered Klein’s motion this summer, he’d be undoing the work done by Craig Antush at Youngstown State. Shortt said that, due to Klein’s drive, his job has been easy.

It’s all about repetition, picking up the left leg, planting it in the same spot, maintaining the same release point and finishing strong. He’s worked on that consistency from day one with Shortt.

“Every part of your body is doing something,” said Klein, who is housed by Ed and Trish Burke of Sag Harbor. “If one part of your body is off an inch here or there, that could throw you off. You have to keep focused on what all those body parts are doing just to make that pitch.”

He is far from a finished product. His high leg kick and stride give baserunners an extra step toward second base. His fastball, generally boring in at 86-88 miles per hour, could and should accelerate, trimming precious hundredths of a second off the hitters’ reaction time. According to Vega, his secondary pitches - a change-up and a curve - need to be polished up.

With his summer out east coming to a close, though, he can’t help but marvel at the strides that he’s made. The season’s heavy workload, which freshmen rarely receive at the college level, prepares him for more responsibility in Youngstown. His confidence, once swooning, is booming. The Hamptons experience as a whole, both on and off the diamond? That’s been a slam dunk, too.

“It’s been real sweet,” Klein said. “I’ve been working some days in baseball camps; there’s nothing better than teaching little kids about baseball. I love it here. It’s been real fun.”