Whalers Push for the Playoffs 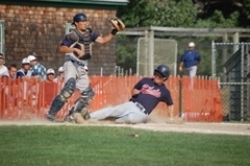 Whalers’ first baseman Evan Laude’s bat is on fire. And the timing couldn’t be better as the team is making a push for the post season.
“He’s coming up big,” said Whalers’ manager Julio Vega on Wednesday.

In the second game of Saturday’s double-header against the New Jersey Pilots, Laude stepped up to the plate in the bottom of the seventh inning with score tied. The Whalers started the inning down 3-2 and Mark Houck led off with a walk. Nick DeProspo got on base when he attempted to move Houck to second with a sacrifice bunt, but the Pilots’ catcher made a bad throw to first base and Houck managed to get to third while DeProspo made it to second. Kyle Crean came in to pinch-hit for Stephen McQuail and belted an RBI-single to tie the game and the stage was set for Laude. He came through with a hard hit ball to the Pilots’ shortstop and DeProspo hustled home for the winning run.

In the first game, Phil Klein once again turned in yet another stellar pitching performance, going the distance and recording a shutout. Klein has allowed only two hits and two earned runs in 14 innings.
The final score was 1-0 and just like the second game, it all came down to the last inning. After a pitchers’ duel, Andrew Wernicki walked to the batters box with two outs and Houck on third base. Wernicki blasted a line drive over the right fielder’s head to score Houck.

The Whalers traveled to Hofstra on Tuesday night to face the Long Island Mustangs and came away with a 9-3 victory, again thanks in part to the bat of Laude. Heading into the fifth inning the Whalers trailed, 3-2. With two outs and 3-2 count, Laude belted a two -RBI triple to give the Whalers a one run advantage.

Then in the fifth inning Laude again came up big with the bases loaded and hit a three-RBI double. Crean then belted a two-RBI double to give the Whalers five runs in the inning. They won the game 9-3.

“We’re playing now the best we’ve played all summer,” said Vega. “We’re going to see if we can make a run at this thing. With the pitching and defense where it is, we have a chance. If our offense stays productive like it has been, we’re going to be a tough team to beat.”
The Whalers host the Peekskill Robins in to double-headers to end the regular season this weekend. On Friday the play at Southampton High School and on Saturday they return to Mashashimuet Park in Sag Harbor. Game time for both twin bills is 2:30 p.m.

Vega said they’re taking it one game at a time, but if they can win three of the last four they should be a lock for the playoffs. If they sweep the Robins, there’s chance they could earn home field advantage.