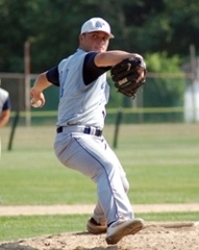 Anyone who thought the Hampton Whalers were out of the playoffs can think again.

After sweeping the Jersey Pilots on Sunday at Mashashimuet Park in Sag Harbor, the Whalers now find themselves tied with the Long Island Mustangs for the third and final playoff spot in the Kaiser Division.

The Whalers defeated the Pilots 1-0 in the first game before scoring a 4-3, come-from-behind victory in the second game.

Head coach Julio Vega said he was pleased with the two wins but wasn’t looking too far ahead.

“We just try and worry about the games we have in front of us,” he ?said. “We have four games against Peekskill next week, so if we’re out four games by then and face them we just have to win four and get in. It would be nice to get into the second spot and host a playoff game here. That would be great.”

The first game on Sunday was scoreless going into the bottom of the seventh inning. Mark Houck Jr. led off with a single and was then sacrificed to second base by Tom Coulombe. David Leon then grounded out to second base, allowing Houck to advance to third. Andrew Wernicki came up to the plate and hit a slicing line drive to right field. The outfielder tried to make a diving catch, but Houck came in to score the game’s only run when the fielder came up empty.

“I was trying to stay short and hit the ball the other way,” Wernicki said after the win. “He got me on a couple of ?sliders a few pitches before, but it was good to get the win. Phil pitched another great game and kept us in the game.”

Pitcher Phil Klein was making his first appearance since throwing a perfect game a week ago.

The first inning went quick for ?him after he struck out the last two batters he faced. Kevin Weinkofsky led ?off the top of the second inning for ?Jersey with a single up the middle, ending Klein’s string of eight hitless innings.

“I liked that they got the hit because it took the pressure off a little bit,” he said. “You can’t go out there and try and pitch a perfect game, you just have to throw your stuff.”

Wernicki was 2 for 3 with an RBI while Leon, Coulombe, Houck and Chris Walker combined for the rest of the Whalers’ six hits. Klein ended up ?pitching another complete game and gave up just three hits while striking out 10.

In the second game, the Whalers were down 3-2 heading into the bottom of the seventh inning when Houck led off with a walk. Nick DeProspo attempted to sacrifice him to second base, but the Jersey catcher threw the ball away and both runners were safe. Leon then successfully sacrificed Houck and DeProspo, giving the Whalers runners on second and third with one out. Kyle Crean was called on to pinch hit for Stephen McQuail and he hit a game-tying RBI single. Then, Evan Laude came to the plate and, with the infield in, hit a hard grounder to the Jersey shortstop Joe Talerico. DeProspo, who was on third, jetted for home. Talerico juggled the ball, as DeProspo stepped on home for the winning run.

Despite trailing for most of the game, the Whalers did not give up. “That’s our team believe it or not,” Vega said. “We just find ways to get on base when we need to. Kyle came in and got a pinch hit. He didn’t try and do anything fancy. We battled back as a team, and you have to take advantage of the mistakes when they’re there and we did that.”

It wasn’t the best walk-off hit, but Laude said he’d take it.

“I had runners on first and third, less than two outs, I was just trying to do a job,” he said. “I got a pitch that I tried to hit hard, the shortstop had a problem with it, and we got the run home.”

Blake Wascom got the win pitching a scoreless seventh in relief. Alan Parks was 2 for 3 with a run scored and an RBI. Crean had the only other hit for the Whalers.

Earlier in the week, the Whalers lost 11-1 to the Long Island Mustangs on July 15. Matt Doran pitched a complete game for Long Island as he shut down the Whalers offense. In nine innings, Doran gave up one run on three hits and struck out six. Pat Holloway started his first game as a Whaler and gave up four earned runs in four innings. McQuail, Crean and Karl Derbacher had the three hits for the Whalers.