A Perfect Day At Mashashimuet 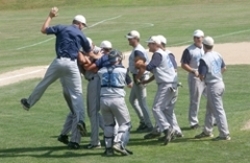 The Hampton Whalers just play better in Sag Harbor said manager Julio Vega. “I don’t know what it is,” he said. “It could be the support they get from the fans.”

Last Sunday, however, the Whalers played their best. And in the first game of a doubleheader against the Metro N.Y. Cadets, the Whalers right-hander from Youngstown State, Phil Klein not only threw his best game, he threw a perfect game. The sophomore faced 21 batters, threw 71 pitches and became the first pitcher in then history of the Atlantic Collegiate Baseball League to rack up a perfect game.
“It was pretty exciting,” said Vega. “It was the first time I had been a part of a perfect game. I’ve been involved with a no-hitter, but never a perfect game.”

Vega has been challenging his offense to swing the bats better and on Sunday they did just that and provided Klein with a bit of a cushion, so the 6’7” freshman could focus on sitting batters down one after another.

In the first inning the Whalers scored one run on a RBI by Chris Walker. Then in the third inning they tacked on three more. And in the fourth, the bats refused to cool down and the Whalers added four more to take an 8-0 lead. That would be the final score.

Meanwhile Klein was taking care of business. He had six strikeouts on the day and had to battle back after getting behind in the count with three balls, not just once but three times.

And like any no-hitter or perfect game, the defense has to have the pitcher’s back. Vega said the other Whalers were definitely aware of what was going on, probably more so than Klein.

“They made the plays for Phil when they had to,” said Vega. “But after we were up by eight in the sixth, it was nice to just sit back and watch him pound the strike zone.”

In the second game, the fans at Mashashimuet Park were treated to an old fashion comeback. Heading into the bottom of the third, the Whalers trailed 5-1. Evan Laude from the University of Rhode Island came through with a 2RBI-double to bring it to within two. Then in the fifth, Laude belted a RBI-single with a two outs to even the score at five each.

The Cadets added two more runs in the top of the sixth, but in the bottom of the inning the Whalers bats’ caught fire. Catcher Chris Walker knocked in two runs with a double to give the Whalers a 7-5 lead. After that, it was just a matter of putting a bat on the ball. Multiple errors by the Cadets allowed three unearned Whalers runs.
“I had been telling them, just put the ball in play and let the other team make the plays,” said Vega. “Kids get nervous and you have to make them make the plays.”

The final score of the second game was 10-7.

The Whalers return to the park this Sunday for another double-header against the Jersey Pilots at 2 p.m.