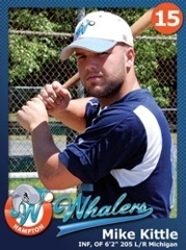 Injuries are nothing new to Hampton Whalers outfielder Mike Kittle.

The red-shirt sophomore from the University of Michigan started his college baseball career on the shelf with a torn hamstring, an injury that occurred during practice his freshman season. Trying to come back just a month and a half later, he re-injured the hamstring and had to sit out four more months. Then last summer, Kittle cracked a few ribs after he fell off a Plyometric box while speed training. The broken ribs shortened what was going to be Kittle’s first summer season of collegiate baseball, in the Livonia Collegiate Baseball League, to four games.

More recently, Kittle has been plagued by arm problems and another pulled hamstring that has jeopardized his season.

Despite all the injuries, Kittle says he couldn’t be happier spending his summer on the East End.

“It’s fun playing for the Whalers,” Kittle said. “We have a fun group of guys, a good coaching staff and we have a pretty good team, so I have no complaints. We’re in a beautiful area, so I can’t do much better for the summer.”

Whalers head coach Julio Vega loves the way Kittle plays the game but think’s it’s unfortunate the way he has had to play through all of the injuries.

“Mike is a good player,” he said. “He’s been nagging injury-wise, but he’s been great. He’s a great outfielder and he runs well, so at the beginning of the season if we had him at first, we’d have him steal some bases for us.”

Kittle has five stolen bases for the Whalers, the second most on the team, and though it appears as if his arm troubles are past him, there is now the possibility he might miss the rest of the season because of the hamstring injury he suffered in the first game of a doubleheader against Metro NY last weekend.

“When we have Kittle, Alan Parks and Karl Derbacher out there we have the best outfield in the league,” Vega said. “So he hasn’t been out there to play because of his arm and now his hamstring, so we’re going to miss him but he’s been a great player for us, and being from Michigan it’s been a great experience for him.”

Kittle said that his friends back home are envious because he got to ?come down and play ball in what ?he called a “vacation spot for the ?summer” while his friends are stuck back in the Midwest.

Kittle lives with Liz Granitz in Sag Harbor but he spends a great deal of time at the Kruel house, where he hangs out with his best friends on the team, Pat Holloway, Blake Wascom and Mark Houck Jr.

Sandy Kruel often cooks dinner for the players before Kittle returns to the Granitz house to sleep.

When Kittle is not playing ball for the Whalers he likes to spend a lot of time at the local gyms and go down to the beach where he can fish and hang out. He also has a part-time job at Southampton Town Hall.

Back in his home town of Clarkston, Michigan, which is about an hour away from Ann Arbor where he goes to school, Kittle ?loves to play golf and spend time ?on Lake Sinclair, near his home. ?The entire Kittle family loves to use their boats on the lake during the summer months but when he has free time, which is something he doesn’t have much of, Kittle also likes to spend time with his friends.

Before he made the final decision to play baseball at Michigan, Kittle had to decide on whether he wanted to play football or baseball in college. Had the 6-foot-2, 205-pounder chosen football he said he would have either gone to Michigan State or the University of Colorado.

“I couldn’t turn down Michigan,” he said. “I loved baseball, and football is just so brutal on the body. I was looking long term.”

Kittle said he really likes playing for the Wolverines and added that he couldn’t ask for a better college atmosphere. Though he chose baseball as his sport, he still gets to watch Michigan games.

“It’s nuts,” he said. “Any time you get 110,000 people in one place it’s pretty crazy. The town is just turned into a huge party. It’s a lot of fun. When they play Michigan State or Ohio State it’s a whole week affair. There is nowhere better to be.”

Michigan was not always one of the top baseball schools in the country, but ever since head coach Rich Maloney took over the team in 2003, the Wolverines have had a winning record. The Wolverines have made the NCAA tournament four of the six seasons he’s been there. The program has churned out notable major leaguers such as Barry Larkin, who was an All-Star shortstop for the Cincinnati Reds, and former New York Yankee Jim Abbott. Current Yankee shortstop, and Kittle’s favorite player, Derek Jeter even started his career at Michigan before pursuing his career with the Yankees.

Kittle would like to follow in those players’ footsteps. “I’d like to play ball after college. That’s always the plan,” he said. “But also the reason why I picked Michigan was so I kind of have a fall-back option just in case I don’t make it in baseball. Coming out of there with a degree isn’t half bad.”

Kittle is majoring in English, although he is not sure what he will do after graduation if baseball is not an option.

Kittle was a late-comer to the Whalers, learning that he would be a member of the team only this May while most of the players knew last fall. He said the main reason for the delay ?was because his coaches at Michigan wanted to find out more information about the Whalers and their coaching staff. Once assistant coach Bob Keller did all of the necessary research, he had no problem sending Kittle to Long Island to play summer ball for the Whalers.

Kittle would love to come back and spend next summer with the Whalers but he said at this point it’s out of his hands. It’s up to both the coaching staff of the Whalers as well as Michigan, but he his hoping to make another appearance on the East End next summer.

“The thing I like most about the team is the group of guys that I play ?with,” he said. “It always makes baseball more fun when you have good guys to play with. We know when to have fun, but we also know when to take it serious.”