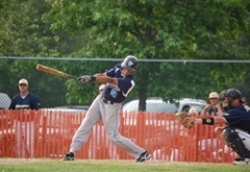 The Hampton Whalers came to town last weekend and pulled off two victories against the Long Island Mustangs in a doubleheader, with a 6-3 win in the first game and a 5-1 win in the second.

Last week Whalers’ manager Julio Vega challenged his offense and on Sunday they responded. The pitchers have been carrying the load for the Whalers all season, but on Sunday the bats did their part as well.

In the first game they got on the scoreboard early with one run in the first inning. They added another in the second and then in the fourth their bats really came alive as they scored four runs to take a 6-0 lead over the Mustangs.

Pitcher Phil Kline, a freshman from Youngstown State held the Mustangs scoreless for the first five innings. Pat Holloway, the Ragin’ Cajun from Louisiana-Lafayette came in and managed to hold and secure the victory, but did allow three earned runs.

“ I was upset,” said Holloway. “But that was the first time I had really been touched all season.”

The earned runs on Sunday were Holloway’s first of the season.
Kline got the win and gave up two hits with two walks and four strikeouts.

In the second game the Whalers’ bats didn’t cool off. When the Mustangs jumped out to 1-0 lead in the top of the first, the Whalers answered with two runs to bring the score to 2-1 and to take a lead they wouldn’t relinquish.

Junior from Southern Connecticut State Karl Derbacher started things off with a single and then stole second base. Alan Parks, a junior from the University of Charlotte, belted an RBI-single to score Derbacher. University of Rhode Island freshmen Tom Coulombe then blasted a RBI-double that scored Parks.

Andrew Guarrasi, a sophomore from New York Tech started on the mound for the Whalers in the second game and after the first inning, held the Mustangs scoreless for the next three to ultimately end up with the win.

In the sixth inning the Whalers added three more runs to sew up the victory.

This weekend the Whalers are home on Saturday at Southampton High School for a doubleheader against the Metro New York Cadets. They will again host the Cadets the following day in another doubleheader here in Sag Harbor at Mashashimuet Park. Doubleheader games begin at 2 p.m.