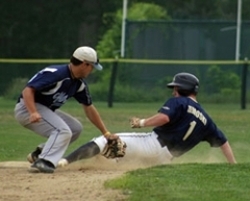 After dropping three straight and six of their last seven, the Hampton Whalers baseball team got back on track with a pair of wins over Long Island in a doubleheader at Mashashimuet Park in Sag Harbor on Sunday.

The Whalers beat the Mustangs 6-3 in the first game before earning a 5-1 win in the second contest.

The day began with the continuation of a game between the two teams that originally took place on Thursday, July 3, in Southampton but was suspended due to darkness with the score knotted at 2-2. Long Island came out on top 5-2 in that battle.

The Whalers are now 9-15 in the Atlantic Collegiate Baseball League’s Kaiser Division, in last place, one game behind Long Island. The top three teams in each division of the league—which also includes the Wolff Division for a total of eight teams—advance to the postseason, with the second- and third-place teams in each division squaring off in a one-game playoff for a chance to face the first-place team in a three-game series for the division title. The winners of each division will then face each other in a one-game playoff to determine the overall league champion.

The Whalers have to vault ahead of Long Island in order to qualify for the postseason, which is why head coach Julio Vega said he was pleased with his team’s ability to pick up a pair of wins in the recent doubleheader.

“Our offense came alive and a couple of people were getting hits and stealing bases,” he said. “It was exciting baseball. It was what I expected a couple of weeks ago, but if they can start doing that now, we still have a chance.”

With the season more than halfway over, Vega says that the final stretch of games will be crucial.

“Hopefully, [Sunday] was the start of a streak of playing good baseball,” he said. “Our pitching has been there all year, so, hopefully, the bats will keep coming alive and we can streak out and win some games.”

Starting pitcher Phil Klein of Youngstown State did his part in giving the Whalers a chance in the first game of the doubleheader. He allowed just two hits over five innings with four strikeouts, two walks and no runs allowed. Reliever Pat Holloway of Louisiana-Lafayette struggled in two innings of relief, allowing three runs off three hits, but the Mustangs’ rally ultimately came up short.

The Whalers did most of their damage in the fourth inning, scoring three runs thanks to a combination of good baserunning, a few hits, some walks and two errors by the Mustangs fielders.

In the second game, Andrew Guarassi of New York Tech got the win for the Whalers, going five innings while allowing three hits, one earned run, six strikeouts and four walks. Blake Wascom of Louisiana-Lafayette and Mike Connors each pitched an inning of shutout relief.

The Whalers held a 2-1 lead after one inning before scoring three insurance runs in the sixth inning.

The Mustangs had as many hits—three—as errors, once again helping the Whalers get on base and score.

Vega said he was pleased that in both games, his team built early leads.

“When we score runs early, we put pressure on the other team,” he said.

Vega also said he’s been pleased with the increased offensive production of players like Houck, Parks and Coulombe, whom he says is the team’s most consistent hitter.

The Whalers were scheduled to play Long Island at Hofstra University on Tuesday before traveling to Peekskill for a doubleheader on Wednesday. On Thursday, the Whalers will begin a set of five straight games against Metro New York, the first place team in the Kaiser Division with a 12-10 record. They’ll play at St. John’s University in Queens on Thursday before a doubleheader in Southampton on Saturday with games at 2 and 5 p.m. They will wrap up the series with a doubleheader in Sag Harbor on Sunday with games at the same times.