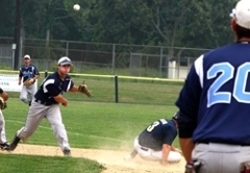 Sag Harbor - There’s just something about Mashashimuet Park. Fans come out in droves, lining the third base line or stationing themselves on the bleachers behind home plate. The crowd roars, the place is buzzing, and the Hampton Whalers have a way of reciprocating.

The Whalers, desperate for a victory after a lost weekend against Lehigh Valley, treated the rambunctious Sag Harbor audience to a pair of triumphs that combined offensive fireworks, solid D and a pair of pitching gems. Phil Klein and Andrew Guarrasi dazzled on the mound and let their teammates do the rest in the Whalers’ 6-3 and 5-1 victories over the Long Island Mustangs.

“Playing at that park is just a great atmosphere,” Manager Julio Vega said. “The crowd is there, they get into it, and these kids get pumped up for it. It gives you a little extra energy when you’re down.”

The victories drew Vega’s club to 9-15 on the year and within two games of Long Island for third place in the Atlantic Collegiate Baseball League’s Kaiser Division. The Whalers stand four games back of first-place Metro N.Y. and Peekskill. Before they can seize first, they have to pick up steam, which is just what they achieved against the Mustangs.

“The funny thing is that I expected the team to be playing like this two weeks ago,” Vega said. “It’s a lot better when you’re winning.”

All season, Klein and Guarrasi have dueled each other for the team lead in earned run average and strikeouts. Fresh off twirling an eight-inning, eight-strikeout effort in which he suffered a hard-luck 1-0 loss Tuesday, Klein continued imposing his will on the opposition. The Youngstown State sophomore dealt out just two hits and struck out four before turning a 6-0 game over to reliever Patrick Holloway in the sixth.

“I don’t know what else to say about that kid,” Vega said of Klein. “If you throw his first start out the window, where I think he was nervous, after that, he’s been lights out. He’s so fluid that the ball gets on people. It doesn’t look like he’s throwing that hard, but he really is. He comes out real smooth and gets in people’s kitchen so they don’t get swings off.”

Holloway let two runners in but induced a grounder to third baseman Mark Houck for the final out, which bumped Klein to 2-2 on the year.

The Whalers generated their offense any way they could think of in the opener. In the first, Karl Derbacher led off with a lined single to right, stole second, tagged up on an Alan Parks flyout, and scurried home when Tom Coulombe hit a grounder to short. Andrew Wernicki doubled and scored on a double play in the second inning. The Whalers tacked on four more in the fourth. They went up 3-0 on a throwing error by Long Island pitcher Ryan Mikalsen on a pickoff attempt. That lead grew to five when Coulombe reached on an infield single, and as the play developed, Parks bolted from second all the way home to score behind Derbacher.

“I just kept waving him,” Vega said. “We haven’t been scoring runs, so I took every opportunity to score. Parks was hustling all the way. It was just great hustle.”

Guarrasi took the hill in game two looking to become the first three-game winner on the staff. The southpaw delivered with another strong performance, going five innings and giving up just a first-inning run. Blake Wascom and Mike Connors tossed two innings of scoreless relief to secure the twin-bill sweep. Connors posted a 1-2-3 seventh after giving up three runs in assuming the 11th inning of Thursday’s game, which was completed with the Whalers falling, 5-2.

Like in game one, the hosts’ aggressiveness paid dividends in the scoring column. They trailed 1-0 after Guarrasi gave up a first-inning run. He settled into a rhythm, and the offense provided plenty of support. The Whalers scored two runs in the bottom half of the inning when Parks chased home Derbacher with a single, and Coulombe knocked in Parks by doubling. They added to their 2-1 by plating three in the bottom of the sixth inning to turn a one-run game into a comfortable margin. They loaded the bases for David Leon, who rapped a grounder to the right side. The second baseman threw home for the force, and in an attempt to turn a 4-2-3 double play, the catcher threw to first. An error there allowed Leon to reach safety, but more importantly for Mark Houck to score. Leon and Kyle Crean then scored on another Mustang error, making it 5-1.

That their runs didn’t come on gappers and homers was of little concern to Vega. From his perspective, the Whalers had a definite plan at the plate and made the opposing defense earn the three outs per inning. Vega estimated that his side hit approximately five flyballs all day, leaving the others to be chased down by the infield.

“We got guys in scoring position and made them make plays,” Vega said. “With the speed we have, if we put ball in play, they have to make the play no matter what it is. They made mistakes here and there and we were able to take advantage of them.”

The Whalers, on the other hand, continued their fine play in the field. Entering the weekend, they boasted the league’s top fielding percentage (.963). They’ll need all aspects of their game in order to work their way into the playoff picture. They and the Mustangs square off Tuesday, the Whalers play two in Peekskill on Wednesday, and it’s back to the road Thursday for a game against Metro N.Y. Once this stretch is over, Vega and Co. will play 10 of their final 12 games in either Southampton or Sag Harbor. Matthew Smith of Yale gets the nod on Tuesday.