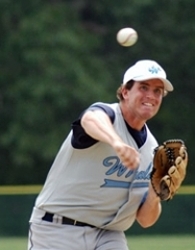 In a doubleheader played in Southampton on Saturday, the Hampton Whalers were defeated twice by the Lehigh Valley Catz to fall to 7-14 in the Atlantic Collegiate Baseball League.

The Whalers were handled 7-1 in the first game before falling 1-0 in the second game.

Lehigh Valley improved to 10-7 and is in second place in the Wolff Division of the ACBL. The Whalers are in last place in the Kaiser Division. Both divisions have four teams.

In the first game, Lehigh Valley broke a scoreless tie in the top of the fourth inning, putting three runs on the board. The Whalers countered with a run in the bottom of the fifth inning when Nick DeProspo hit a sacrifice fly to left field that scored Alan Parks, who had reached base on a single and advanced to third on a double by Mark Houck Jr. The Catz added four more runs in the top of the seventh inning for the final margin.

Parks, Houck and Tom Coulombe had the only three hits for the Whalers. Ryan Proudfoot went five innings for the Catz, allowing just two hits and no walks. Chris Morrison finished it off, allowing one hit with one strikeout and one hit batsman.

In the second game, the Whalers again could muster only three hits, which came off the bats of Houck, Andrew Wernicki and Chris Walker. The Catz scored the only run of the game in the fourth inning, when an RBI single by Vin Avella brought in Tim Morris, who reached base with a leadoff walk. Avella was 2 for 3, Newell was 2 for 4 and Pablo Rosario was 2 for 3 for the Whalers.

Brian Dudzinski went the distance for the Catz, allowing three hits and three walks. He struck out two. Gardner Leaver took the loss for the Whalers after going five innings while allowing six hits and one earned run to go along with three strikeouts and three walks. Matt Smith pitched the final two innings, allowing one hit and striking out four.

The Whalers stranded seven baserunners in the loss.