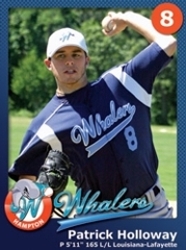 Pat Holloway is an outgoing guy who has an easy time making friends. Those qualities have served him well not only in his baseball career, but also in life.

The 19-year-old lefty pitcher made the long trek from his home state of Louisiana—where he attends Division I Louisiana-Lafayette University—to join the Hampton Whalers collegiate baseball team in its inaugural season this summer. And while he is far from home in an environment he said is completely different than what he is used to, the adjustment was nothing compared to what he endured in high school.

After spending his freshman and sophomore seasons as a rising talent on the baseball team at Brother Martin High School, Holloway and his family had their lives turned upside down by Hurricane Katrina in 2005. The Holloways left their hometown of Metairie, which is five minutes outside of downtown New Orleans, before the storm hit, but like so many other families, they were not able to return. They relocated to Lafayette, where Holloway and his twin brother, Sean Holloway, enrolled at Opelousas Catholic High School. While many of Holloway’s friends from Metairie returned home eventually, his family remained in Lafayette, where his father Patrick Holloway had grown up.

“It was tough,” Holloway said during an interview at Mashashimuet Park in Sag Harbor on June 25. “But everyone accepted me right away.”

With an ever-present smile and easy-going demeanor, it’s easy to see Holloway fitting in almost anywhere. Holloway said that his naturally outgoing personality helped him make the adjustment to a new high school at the start of his junior year, and he also took a glass-half-full approach to the move.

“Any of my teammates will tell you that I’m not shy,” he said. “I just started talking to everyone right off the bat.”

The move was serendipitous for Holloway, as he found himself playing high school ball in the same neighborhood as Louisiana-Lafayette, which he said opened his eyes to the school and made him want to play there. The university has a reputation as a top-tier baseball school, having competed in the College World Series in 2000. The team has also qualified for the NCAA tournament regionals three times since then, including a trip to the regional final in 2007. The Ragin’ Cajuns draw an average of 3,000 to 4,000 fans to their games as well.

Holloway redshirted his first season because of the large number of veteran pitchers on the Ragin’ Cajuns roster, but assistant coach John Szefc—whose friendship with Whalers general manager Butch Caulfield helped Holloway join the team—said he expects Holloway to have a big role next season, particularly if he can continue to hone his skills while playing for the Whalers this summer.

“Our staff has gotten pretty right-handed and finding good lefty pitching is hard to do,” Szefc said. “I think if he comes back from the summer situation and he’s progressed like we figure he probably will be, there’s no reason why he shouldn’t log a good chunk of innings for us.”

The scouting report on Holloway, according to Szefc, is that he’s a solid lefty with a lot of potential.

“He’s pretty traditional for a lefty as far as having a fastball, curve and change,” he said. “He throws in the mid-80s, 84 to 86, so his velocity is competitive enough. It’s just a matter of how good his breaking ball gets and how well he can locate those three pitches.”

Szefc added that Holloway is also working on developing a two-seam fastball that will have movement down and away against right-handed batters.

“I guess I’m biased,” he said with a smile. “They’re just basically everything that I want to be.”

Holloway’s appreciation for Pettitte doesn’t extend to the rest of the veteran pitcher’s teammates—Holloway made it clear that he’s a Boston Red Sox fan, an allegiance, he says, that he’s paying for while playing in the New York area this season.

“Everyone on the team gives me crap about it,” he said with a laugh. “But my dad was a Red Sox fan, so I can’t help how I’m raised.”

Holloway said he’s eagerly anticipating a pair of trips into New York City with his team, as they’ll attend both a Yankees and Mets game. The bonus will be the fact that the Yankees will be playing the Red Sox when he and his teammates make their trip to The Bronx.

When Holloway isn’t busy playing baseball or training—which isn’t often—his other favorite pursuit is playing the guitar, a skill he said he’s been honing for six years. He said he didn’t bring his guitar with him to Long Island, since he didn’t think he would be allowed to bring three bags, and he admitted that he’s been itching to get his hands on one, but of course, finding a lefty guitar makes it all the more difficult.

Even without his guitar, Holloway said he’s been enjoying his time in the Hamptons to the fullest.

“It’s nice, it’s very nice,” he said with a grin. “It’s not even close to the same as New Orleans. In New Orleans, it was all city and then we moved to Lafayette and it was all country. This is kind of a bit of both. The weather is nice and it’s really pretty.”

Both Holloway and Whalers teammate Blake Wascom—who also attends Louisiana-Lafayette—are living with the Kruel family in Sag Harbor. The Kruel household has hosted various athletes playing other sports for the summer in the Hamptons and Sandy Kruel said that this year she had hoped to take a break from hosting, but when the Whalers organization had a hard time finding enough host families, she opened her doors.

After bemoaning the fact that Holloway and Wascom empty her food cupboards on a regular basis, Kruel said that having them in her home has been a great experience, particularly for her son Brandon Kruel, who is a pitcher for the Pierson baseball team and will be a junior next year.

“I just couldn’t say ‘no’; I’m a glutton for punishment,” Kruel said. “But we wanted to take a pitcher, so Brandon could see what it takes to be a Division I pitcher.”

Holloway, Kruel says, has thus far provided a perfect example for her son.

“Pat’s work ethic is amazing,” she said. “He never stops training. It’s wonderful because Sag Harbor is such a small town that even if you’re good, you’re the big fish in the small pond. To see somebody of that caliber have to work to get to that level, I could preach it all day long, but he’s never going to hear it.”

Holloway said he likes being part of the inaugural Whalers team and has relished the team’s emergence in the community, especially after weekend doubleheaders in both Southampton and Sag Harbor.

“It’s cool to be part of something new,” he said. “I like it, and it’s really neat when people find out about us and they are really into it.”

Of course, playing both collegiate and summer baseball is more than a full-time job, and Holloway admitted that he does miss his family from time to time. He said, however, that sacrifice is worth it.

“It takes its toll, playing baseball all the time,” he said. “But if you want to make it to the next level, you have to make that sacrifice.”

Making sacrifices is something he and his family understand. They’re still trying to sell their house in Metairie after deciding to stay in Lafayette permanently. For his part, Holloway has taken it all in optimistic stride.

“Initially we wanted to move back, but it’s just not the same,” he said. “But everything happens for a reason. I have a lot of friends now and I have friends out here, too.”