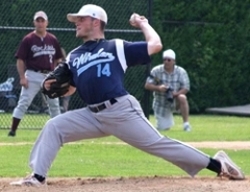 New York - The Hampton Whalers baseball team isn’t satisfied with being just another entry in the Atlantic Collegiate Baseball League. While it could be deemed an expansion team, its talent stands up well against the ACBL’s elite and longstanding teams. Tough losses, which the Whalers have endured in bulk of late, are losses nevertheless.

They had lost three straight games and were eager to get back in the win column. The club responded with arguably their best effort of the season, a near-spotless 5-0 triumph at St. John’s University over the division-leading Metro NY Cadets.

“I think we needed to come out and play well yesterday after that display we put on at Peekskill,” Whalers Manager Julio Vega said, referring to an 8-2 defeat the previous night. “We came out focused a little bit more, intense, and we were concentrating more on our at-bats.”

Whalers ace Andrew Guarrasi threw seven innings of shutout ball before turning it over to the bullpen in earning his second victory, and also his side’s first at St. John’s in three tries. With the outing, the New York Tech left-hander lowered his ERA to 1.41, second among Whaler starters, as well as increased his strikeout total to 25. Guarrasi mixed the fastball well with his off-speed pitches to keep the Cadets off balance all evening.

“He was throwing the ball well,” Vega said. “He was throwing it for strikes, and I think that helped a lot. His curve was pretty good. He was trying to make them hit the ball.”

The Whalers (7-12) had produced just three runs in the previous three games, yet it burst out for five to amply support its starting pitcher. Vega’s club scattered nine hits in scoring one run in the second, another in the sixth, and three more in the eighth. Still, the offense has room to improve, said Vega.

“Offensively, we just haven’t been swinging the bats that well,” Vega said. “I think our approach has been non-existent. We worked on that before the game, and we swung the bats a little better.”

The pitching quality has been excellent with rare exception to this point. In addition to Guarrasi, Phil Klein tossed eight innings in a hard-luck 1-0 defeat at Long Island on Tuesday. In the Whalers’ 2-0 loss in game two against Quakertown Sunday, Gardner Leaver went six innings and gave up one earned run.

Scheduling has sent the Whalers on the road for 14 of their first 19 games. While that leaves them with a favorable schedule for the month of July, Vega won’t deny that the travel has worn on his squad, saying “I think the guys are a little tired mentally.”

Against Peekskill, the Whalers fell behind 8-1 after four innings. The Robins chased starter John Flanagan after 1 1/3 innings, and then tacked on five runs against reliever Patrick Holloway. Dan Reiser, a Pierson alum, extended his scoreless string to four innings by throwing two shutout innings to close out the game.

On Tuesday, Klein’s eight-inning, three-hit outing went for naught as the Whalers failed to score on the Long Island Mustangs pitching staff despite drawing nine walks. The game remained scoreless until the bottom of the ninth when Tom Zebroski scored on a Brendan McCrea single with one out.