Whalers Earn Split Of Doubleheaders To Delight Of Jammed Stands 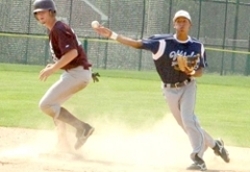 Sag Harbor - Baseball fans on the East End had heard and read about the Hampton Whalers baseball team, yet due to a schedule that began the local squad on the road for 11 of their first 12 games, the team’s followers couldn’t see for themselves why the Whalers were drawing all that attention.

This past weekend, when the Whalers hosted a pair of doubleheaders, the team officially arrived in Southampton and Sag Harbor. Greeted by hundreds of fans, the Hamptons’ entry in the Atlantic Collegiate Baseball League put on a fine display of hitting, pitching and defense to earn splits with defending champion Kutztown and then Quakertown.

Team officials, including General Manager Butch Caulfield, were enthused by the reception. “It’s been great,” Caulfield said. “The support from the community has been outstanding, and I think it’s only going to get better.”

“It shows you what the future of this [project] is,” added Team President Rusty Leaver.

On Saturday in Southampton, the Whalers dropped a 4-2 decision to Kutztown in the first game before rebounding for a 6-4 win in the nightcap. In the opener, they mustered just four hits off Rockies starter Darin Gorski - yet still held a 2-1 edge going into the seventh inning thanks to a two-run home run by catcher Nick DeProspo. However, Kutztown scored three runs off reliever Blake Wascom with three hits, although two of those runs were unearned. Gorski shut the door with a 1-2-3 ninth. The loss wasted a fine effort by Whalers starter Andrew Guarrasi, who gave up one run and struck out nine in six strong innings.

The Whalers struck back in game two of the twin-bill. After their starter, Tim Therrian, surrendered two runs in the top of the first, the Whalers answered with five of their own in the bottom half. Mike Kittle (2-4), David Leon (3-4) and Mark Houck, Jr. (1-4) all singled and scored in the frame, and the Whalers’ production was also abetted by two Kutztown errors. Therrian clung to a 5-4 lead before turning the ball over to Brian Saldana, who tossed two perfect innings with three strikeouts to earn the save.

“The time pitched, he got hit around a little bit,” Vega said. “I told him he had to work on a couple things, and he did. He came out and pitched great. That’s what you expect from kids in the summer. You want them to adjust and not make the same mistakes over again.”

The Whalers came back in the opener at Sag Harbor’s Mashashimuet Park and notched a 5-2 victory over Quakertown. Matthew Smith of Yale was forced into action when Frank Ryan, the slated starter, tweaked a hamstring trying to get loose for the game. Smith responded by pitching five solid innings in his first start this summer. Left-hander Patrick Holloway stepped in thereafter and held the Blazers at bay for the final two.

David Leon led the Whaler attack with a two-run double. The offense received a jolt in a most unusual fashion - a steal of home. With Charlotte’s Alan Parks at third and Chris Walker at the plate, Vega weighed his options.

“I said ‘if he gets behind strike one, you’re just going to go,’ ” Vega said. “It got down, and Alan just took off. He stole it easy. It was good for the crowd.”

With the steal, Parks remained perfect on the season in steals, and his seven thefts rank him third in the ACBL, four back of Peekskill’s Matt Maher. “He can run a little bit,” Vega said of Parks. “He’s a good baseball player, and he’s starting to swing the bat a little better.”

In game two, East Hampton alum Gardner Leaver was the hard-luck loser for the Whalers in a 2-0 defeat. Leaver pitched six strong innings and gave up just one earned run. However, Quakertown threw a pair of southpaws at the Whalers, and the hosts had no answer. Still, Vega thinks the bats are just warming up.

“Offensively, we’re right there on the brink of busting out,” Vega said. “The pitching has been there. It’s keeping us in games.”

Closing out what was, in the words of Rusty Leaver, an “amazing” scene in Sag Harbor, one of the village’s own - Pierson grad Dan Reiser. Reiser relieved Gardner Leaver in the seventh and set the Blazers down 1-2-3. The Whalers put the tying run on base in the bottom of the seventh yet were unable to push anyone home, thus dropping the team to 6-10 overall.