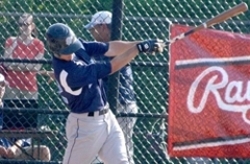 Peekskill - When the schedule was released for the Atlantic Collegiate Baseball League, revealing that the Hampton Whalers would have to begin their season practically living on the road, it could have been likened to the rookie in the big leagues paying his dues to the veterans.

The incumbent teams have no choice but to take notice now, as barely two weeks into their inaugural season, the East End boys are busy exacting payback, proving they’re most certainly in the championship discussion even as a first-year entry. Behind an excellent performance from starter Phil Klein and an 11-hit attack, the Whalers trampled the Peekskill Robins, 7-2, for their fourth victory in the last five games.

The Whalers (4-7) sit in fourth place in the ACBL’s Kaiser Division, four games behind first-place Metro NY and one back of the Long Island Mustangs (4-5) for third. With plenty of season to go, Whalers Manager Julio Vega can sense that his team’s just starting to pick up steam.

On The Attack, Tom Coulombe, the only player to start all 11 games for the Whalers, drove in two with a single, giving his side a 3-0 advantage early. That allowed Klein to settle into a groove. The lanky right-hander went seven innings, giving up nine hits and two runs while striking out six. Klein, who just completed his freshman year at Youngstown State, worked in and out of trouble, giving up solo runs in the fifth and seventh innings with the Whalers already owning a substantial lead. Yale’s Matthew Smith and Louisiana-Lafayette’s Blake Wascom got three outs apiece to seal the win.

Southern Connecticut State junior Karl Derbacher, the Northeast 10 Player of the Year, made his Whalers debut and went 1 for 2 with two RBI. As excited as he was to slot Derbacher into the three hole to “give us that extra hitter with gap power in our line-up,” Vega was thrilled to drop him between right fielder Mike Kittle and left fielder Alan Parks.

“We’re going to have one of the best outfields in the league,” he said. “Those guys are going to cover a lot of ground out there.”

Over the weekend, the Whalers swept a doubleheader from the Jersey Pilots to end their six-game losing streak to start the season. Andrew Guarrasi and Frank Ryan picked up wins for Jersey. Nick DeProspo led the attack by going 3 for 4 with three RBI in Game 1. The next day, the Whalers grabbed one of two in Quakertown, riding Gardner’s Leaver’s two-hit, seven-K shutout to a 4-0 victory.

“We knew we had something there; it was just whether we could catch a break here and there,” Vega said. “We were hitting balls right at people when men were in scoring position, but we knew we were going to hit.”

The Whalers have played 10 of their first 11 games on the road, and they’ll make it 11 of 12 on Thursday when they face Metro NY at St. John’s. Last Thursday, the Cadets downed their visitors, 7-1. After that, Vega’s squad plays nine of the next 12 on the East End, and 19 of the final 28 contests.

“Going on the road is tough no matter where you play,” Vega said. “You have to give these guys credit for taking their lumps early and playing hard. We’re going to be home a lot at the end of this month and almost all of July. Toward the end of the season when teams are getting tired, we won’t be traveling much. We’ll be at home sitting pretty and hopefully playing well. Those bus rides out to the Hamptons will be tougher and tougher."