Whalers fall to Mustangs in home opener in Southampton 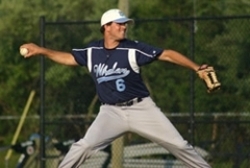 The Hampton Whalers collegiate baseball team got the monkey off its back and picked up its first win of the season in the Atlantic Collegiate Baseball League, beating the Jersey Pilots 7-1 in the first game of a doubleheader in New Jersey on Saturday.

The Whalers completed the sweep with a 6-2 win in the second game and extended their win streak to three games by beating the Quakertown Blazers 4-0 in the first game of another doubleheader on Friday in Quakertown, Pennsylvania. The Blazers fought back to win the second game 7-1.

Last week, the Whalers lost their home debut in Southampton to the Long Island Mustangs, falling 5-3 on June 10. They followed that opening loss with a 7-1 loss to Metro New York Cadets at St. John's University on Thursday.

Whalers head coach Julio Vega said on Monday that picking up the first wins of the season was a relief.

"It was good, it felt great," he said. "We played really, really well and we hit the ball."

The Whalers are now 3-7 in the Atlantic Collegiate Baseball League, heading into a much-anticipated pair of home doubleheaders this weekend. The Whalers will face off against the Kutztown Rockies at the varsity baseball field at Southampton High School on Saturday, with the games slated to start at 2 and 5 p.m., respectively. The following day, they'll host Quakertown in a doubleheader at Mashashimuet Park in Sag Harbor, with games scheduled for the same times.

The Whalers were consistent on offense and had good pitching performances in both wins against the Pilots. In the first game, Frank Ryan got the win on the mound, allowing no runs, five hits, three walks and five strikeouts in six innings of work. Doubleheader games last only seven innings.

Nick DeProspo of Southern Connecticut State led the Whalers by going 3 for 4 with a single, double and triple as well as three RBIs and a run scored. Kyle Walker of C.W. Post and Kyle Crean of the University of Albany both went 2 for 4 with a run scored.

In the second game, the Whalers scored five runs in the first inning to set the tone. Andrew Guarrasi of NYIT got the complete-game win, allowing two runs on 12 hits with five strikeouts. Andrew Wernicki of Iona was 3 for 4 with two RBIs and a run scored while Evan Laude of Rhode Island was 2 for 4 with an RBI.

East Hampton graduate Gardner Leaver, now at Rhode Island, pitched a gem in the opening game against Quakertown, going the distance while allowing just two hits and striking out seven batters. David Leon of Youngstown State was 3 for 4 with a pair of RBIs and a run scored.

The pitching prowess belonged to the Blazers in the second game, however, as Greg Angelo threw a one-hitter over six innings with three strikeouts and no walks. Crean had the lone hit for the Whalers.

In the 7-1 loss to the Cadets, the Whalers stranded a number of base runners and fell short, despite outhitting the Cadets 9-7. Wernicki was 4 for 4 with a double in the loss.

Despite a loss in the home opener, Hamptons Whalers founder Rusty Leaver said he was happy with the turnout and environment at the first home game on June 10.

"It was somewhat of a relief to see baseball instead of just talking about it," he said. "In essence, we're really happy with the first day and the turnout. Winning would have been great, but it was a close game. It's what we had in mind. I saw a lot of people enjoying it."

Kittle, who came all the way from Michigan to play on the team, said he enjoyed the experience of the team's first home game and is looking forward to more games in the team's new home in the Hamptons.

"It's fun getting out in front of the community and playing baseball," he said. "This is a beautiful place. There aren't many better places to be."