The Hampton Whalers Are Here, and for Real

In addition to opening their windows and pools to welcome the summer, this year Hamptons residents are also opening their doors to a small baseball team with big ambitions.

The Hampton Whalers is a new baseball team composed of 25 Division I and II college players. With 20 home games split between Sag Harbor's Mashashimuet Park and Southampton High School, the team will take on an eight-week schedule in the Atlantic Collegiate Baseball League. While the players are in the foreground, the man responsible for the team's creation stands behind the scenes. Rusty Leaver, known for Montauk's Deep Hollow Ranch, formed the team out of his love for the all-American sport. "The template for this team is the Cape Cod baseball league," said Leaver. The Cape leagues have a reputation for producing major league players, and drawing huge crowds to the stands. Leaver has the same high expectations for Hampton baseball, stating that he hopes to have at least five or six East End teams a year from now. Along with his faith in the Hampton's baseball, Leaver believes in his players. Going to a Whalers' baseball game, "people are going to see kids who, in a few years, will be in the major leagues," he promised. 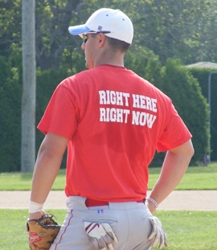 Even with starry eyes set on big dreams, the Whalers cannot forget their humble beginnings. Formed by what Leaver calls "a small grass-roots effort," the team owes much of its current position to donations and sponsors who came out of the woodwork to help. Jerry Seinfeld, J. Crew CEO Mickey Drexler and local businesses like the Hampton Jitney sent checks in generous amounts to the team as a show of support. Rawlings, a national sporting goods company, donated all the team's equipment. At the recent practice, a Rawlings representative said that the company is known typically for funding large, popular baseball teams. In terms of sponsoring a new, unknown team like the Whalers, however, he said, "This is not something they normally do,".

While companies and celebrities promoted the team with their checkbooks, Hamptons residents stepped up to the plate by opening their homes to the players. "Skip was the first person locally to step up," Leaver said. Skip Norsic, a Hampton resident and business owner, supplied a house for some of the coaches and players to live in throughout the summer. Tom Gleason, a Sag Harbor native, has a few players living with his family as well. The Hampton Whalers is a team that accepts players from all over the nation. Many players are not from New York and have never even seen the Hamptons. "For them to be in the Hamptons and live in a different environment, it's lovely to see," said Gleason. 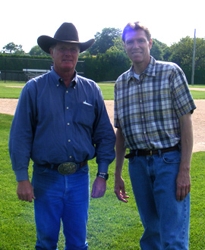 While reporters and coaches peppered the field at the intimate practice this past Wednesday, another significant figure made an appearance. Pat Shortt, a major league baseball scout for the northeast region, stood on the sidelines, studying the players and observing the team in action. Shortt spoke with the team and gave advice about the challenging major league transition, adding that the players are "here to improve their skills with hopes for major league."

Coach Butch Caulfield, the man facilitating the team's progress toward bigger and better things, also has high hopes for the Whalers. Having coached one year at SUNY Westbury and nine years at New York City College of Technology, Caulfield has the experience a new team needs, and he believes in the Whalers. "We're a very athletic team built around defense and pitching," he said.

There is much talk surrounding this new dream team and everyone seems to have something to say, but what about the players? Nineteen-year-old Louisiana natives Patrick Holloway and Blake Wascon reflected on their recent experiences with the Hampton Whalers. "The opportunity is really great," said Holloway. "We want to be seen by the right people." With Shortt standing a few feet away from them, it's safe to say that the "right" people will be seeing a lot of the Whalers. Holloway and Wascon, both members of the University of Louisiana Lafayette baseball team, are staying in Sag Harbor for the summer - an experience Halloway summed up in three words. "I love it," he said.

While residents from various parts of the community are contributing to the baseball team, the players also plan on giving back. Michael Mirras, a resident housing three players, said, "Families have kids who love baseball and hope that the players living in their homes will invigorate and encourage their kids." So the next time you see a kid in a playground with a mean curveball, it's the Hampton Whalers you should thank.