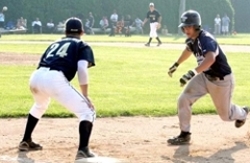 Southampton - Rusty Leaver looked around and saw a finished jigsaw puzzle, one that he’d been working on since September. The Hampton Whalers took the diamond right around 5 p.m. on June 10 for the first inning in front of their home fans. A victory would have stretched Leaver’s smile even wider – they lost to the Long Island Mustangs, 5-3 – yet considering all that needed to come together in a short period of time, the Whalers president was enthused about the momentum both on and off the field.

“I’m really happy with the first day’s turnout,” Leaver said. “Winning would be great, but close baseball, quality baseball, seeing kids come here and hit the ball hard, seeing pitchers throw 90 mile-per-hour fastballs, that’s what we had in mind when we first came up with this idea.”

The Whalers, who are members of the Atlantic Collegiate Baseball League, were greeted by dozens of fans and the Whalers mascot, who lined the left- and right-field lines. After the national anthem was played, Southampton Town Councilman Christopher Nuzzi welcomed an evening of baseball by throwing out the first pitch to Whalers catcher Nick DeProspo.

Phil Klein of Youngstown State, who admitted to being “a little timid out there,” received the nod for Whalers Manager Julio Vega. The lanky right-hander skated out of early trouble in the first, fanning the final two batters, but he wasn’t as lucky in the second. The Mustangs’ Philip Pursino plated the first run with a sacrifice fly to right, and Long Island went up 2-0 thanks to the first of two Whaler errors. The second came in the fourth inning, leading to the Mustangs’ third run.

“We can’t afford to make mistakes,” said Vega, an assistant at St. John’s University this spring. “We gave them three runs early. They got one hit and we were down, 3-0. We have to get the first man out and come in throwing strikes. We’re going to get better.”

The Whalers fell behind 4-0 before mounting a comeback. In the top of the fifth, they loaded the bases with nobody out on an infield single by Evan Laude, a hits batsmen and David Leon walk. Kyle Walker, a C.W. Post product, broke the drought by smacking a Sandy Sussman pitch deep into the shortstop hole for another infield single. Michigan’s Mike Kittle then laced a single to right to cut the deficit to two.

That margin was trimmed to one in the sixth courtesy of the night’s hardest-hit ball. Andrew Wernicki stroked a Sussman offering over the fence in left field for a solo home run. “I think I got a little bit of a wind gust, but I’ll take it,” the Iona junior said laughingly. However, UConn’s Ryan Mikalsen entered and put out the fire in the middle to late innings, and after Long Island notched an insurance run in the eighth, the Whalers went quietly in the ninth to end the game.

The top of the Whaler batting order did its job. Leon, Walker and Kittle all reached base twice, leading an attack that piled up nine hits – one by each player in the lineup. George Washington’s Mike Zebroski led the Mustangs, reaching base four times on two hits and two walks, while also scoring three runs and hitting a sacrifice fly. The locals did a nice job defensively despite the early mishaps, turning two unorthodox double plays to prevent further damage. In the sixth, Wernicki hauled in a Michael Amendola fly ball in left and fired home to DeProspo, who dove to his right to tag Ed Squeri. With the bases jammed in the eighth, Whaler third baseman Mark Houck fielded a hot grounder, threw home for the second out, and DeProspo whipped the ball to Laude at first for a 5-2-3 twin killing.

Leaver’s charges, which have begun their inaugural season 0-5 in the ACBL’s Kaiser Division, have been the victim of some growing pains as well as just plain bad luck. Aside from dropping the front end of a doubleheader in Kutztown, 11-2, the remaining four defeats have come by a combined seven runs. In addition, promising Boston College infielder Barry Butera suffered a knee injury over the weekend and will miss the rest of the season. Even still, Vega’s confident that his team’s fortunes will turn around as they enter a seven-game road stretch that begins on Thursday at his old stomping grounds, St. John’s University, home of the Metro N.Y. Cadets (7 p.m.). The Whalers return home Saturday, June 21, for a doubleheader against Kutztown in Southampton 2 p.m./5 p.m.). The following day, they play two with Quakertown at Sag Harbor's Mashashimuet Park.

“We’re off to a rough start, but we’ll get it together and start winning some games soon,” Wernicki added. “We’re starting to jell a little bit more. Each and every day you see it, so I think we’ll be fine.”

Some of the Whalers, including a Gahanna, OH, native Klein, have even grown accustomed to calling the East End by its proper title for the next three months – home.

“It was good seeing everyone come out for the game,” he said. “Overall, it wasn’t a bad game for us. It was nice coming back home. We’re used to the field, it was a nice day out, you can’t ask for much else."

Dan Reiser, a Pierson graduate who just completed his freshman season at Springfield College, signed to play with the Whalers as a reserve on Monday. He voiced his enthusiasm for playing summer ball.

“It’s awesome,” Reiser said. “I needed a team to play on for the summer, and Sandy Kruel got me a tryout down here. I threw in front of them, they said they’d call me in a couple days, they called me, and told me they were going to put me on the reserves.”

As a reserve, Reiser will sit in the dugout and travel to all road games. The opportunity to play will only arise if another pitcher is injured or otherwise inactive.

Reiser appeared in one game for the Pride. The freshman started their April 10 game against Endicott, which ended in an 8-5 decision in favor of host Springfield. Reiser went 2 2/3 innings, gave up five runs (one earned), two hits and struck out one.

According to Vega, the Whalers also have filled a void in their outfield by hooking Karl Derbacher, the 2008 Northeast-10 Conference Player of the Year. In his junior season at Southern Connecticut State, Derbacher hit .408 with a team-high 53 runs batted in and 28 stolen bases.