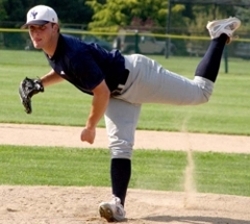 Southampton - The brand new Hampton Whalers collegiate baseball team emerged from Southampton High School and first set foot on the diamond that, along with Sag Harbor’s Mashashimuet Park, it would call home for the summer. In the handful of days before its June 6 debut in Pennsylvania, a squad made up of players from next door to towns in Nebraska will find out just what they’re made of, both individually and as a group.

Tuesday marked the first day of practice for the club that makes its debut in the Atlantic Collegiate Baseball League this weekend. The players ran through a series of drills and played three innings of simulated ball, yet more than anything else, they began familiarizing themselves with the players with whom they’ll spend the dog days of June, July and August.

“I’m excited about it,” Patrick Holloway, a left-handed pitcher from Louisiana-Lafayette, said. “It’s an awesome opportunity to play summer college ball, to get to know some new guys and hopefully get seen by some scouts.”

Holloway, like many of his out-of-state teammates, settled in with his host family mere hours before having to report for day one on the diamond. Mike Kittle, who just completed his sophomore season at the University of Michigan, signed on to play over the weekend and quickly packed his bags for New York.

Opening Day
Practice, conducted by General Manager Butch Caulfield, lasted about 90 minutes. Caulfield began it with a short rundown of the day’s agenda before the players loosened up by jogging along the outfield fence and playing catch. Caulfield, an assistant coach at New York Tech, led infield practice, with personnel alternating in and out to field grounders around the diamond and make the specified play. In left field, Ed Bahns, who heads the East Hampton High School baseball program, warmed up the outfielders.

What followed was three innings of a simulated game. Pitchers on the roster, such as Rhode Island right-hander and former Bonacker Gardner Leaver, as well as Tech’s Andrew Guarrassi, took the mound to pitch against live hitting. Batters included the likes of Barry Butera, a sweet-swinging infielder from Boston College, and Mark Houck, who hit .359 for NAIA school Peru State (NE) this spring. All hitters swung the instruments they’ll use throughout the Whalers’ 40-game season yet didn’t all season in college – wooden bats. Butera said that performing well in the eyes of major league scouts and coaches should translate to success on the field.

“If everyone’s trying to excel individually, the team’s going to benefit from that,” Butera said. “We’re all here to have fun this summer, but we’re also here to take things seriously. When we go back in the fall, coaches are expecting us to be better players than when we left.”

Once the simulated game finished, Caulfield called the troops back into the infield to review the day’s work and the coming days’ schedule. The games that count are less than a week away. The Whalers open with a doubleheader against the Lehigh Valley (PA) Catz on Saturday, June 7, to be played at Coca-Cola Park in Allentown, PA, which also houses the Triple-A Lehigh Valley IronPigs of the International League. They play two more on Sunday, June 8, against two-time defending ACBL champion Kutztown (PA) before returning to the East End for their home opener against the Long Island Mustangs. The game is set for 5 p.m. at Southampton High. Their debut at Mashashimuet Park won’t take place until Sunday, June 21, when they host a doubleheader against Kutztown (2 p.m./5 p.m.).

Although a loose atmosphere comes with summer baseball, Leaver said that everyone’s on the team for the same reasons - to develop their skills, to be seen by scouts, to win, as well as have a little fun.

“We came here to play; every kid knows that,” said Leaver. “They come down to get work in by themselves, and hopefully don’t have the coaches' keep after them. Everybody comes out here in a workmanlike manner and still has fun at the same time.”

Leaver also will serve as the team’s tour guide. Some on the roster played their high school ball here and thus are familiar with the Island and the Hamptons. Many are like Holloway, Houck and right-hander Phil Klein, having heard of the Hamptons only for its vacation options and celebrity scene. Tuesday’s practice was the first of many steps the Whalers will take to turn the East End into a baseball environment as well.

“It’s great to play somewhere as nice as this,” Leaver said. “It’s a great place to be and to play baseball. It’s going to be awesome for the community.”