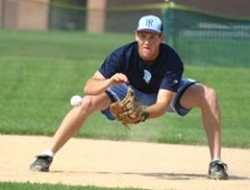 Not even the large, brown cowboy hat could hide the smile on Rusty Leaver’s face on Tuesday as he watched members of the new Hampton Whalers collegiate baseball team warm up on the varsity field at Southampton High School.

Mr. Leaver, of Montauk, is the founder of the team, which is comprised of college baseball players looking to keep their skills sharp during the offseason and possibly attract the attention of Major League scouts. The players come from colleges and universities from Massachusetts to Louisiana, while East Hampton graduate Gardner Leaver, Rusty Leaver’s son, is the lone local product.

The players on the team will live with host families in the Hamptons this summer and many of them will hold part-time jobs as well. Most of them arrived on Sunday, including 20-year-old Barry Butera, who plays for Boston College and hails from Louisiana. Mr. Butera will live in Montauk this summer and said on Tuesday that he’s excited to be part of the team.

“It’s beautiful out here and I really love the beach,” Mr. Butera said. “I think it’s really exciting to be part of the team and it’s unique because no one has ever played on this team before. It’s fun to be one of the first people to do it.”

Leaver said that putting the team together, finding host families for the players and setting up a place for them to play was a process that required a lot of hard work, but he gave credit to the larger Hamptons community for supporting his vision.

Skip Norsic of Emil Norsic and Son in Southampton is one of the main sponsors of the team, while Rawlings has donated all the uniforms and equipment. Several local gyms, including Sag Harbor Gym and the gym at Gurney’s, have donated free gym memberships to the players.

“All of these kids have a dream and they’re dedicated to making it to the next level,” Mr. Leaver said.

The energy and enthusiasm that Mr. Leaver brings to the organization should certainly help those players achieve those dreams, according to Rawlings representative John Mauchan, who was at the field on Tuesday.

“I think it’s great,” he said. “It’s great to have baseball on Long Island and Rusty is as passionate as they come, so it’s good to be associated with him.”

Also on hand was Major League Baseball scout Pat Short, who gave a short talk to the players before they began to warm up.

“I told them that they’re here and they can have fun and enjoy themselves, but when they step between those lines, they have to display themselves to the best of their abilities,” he said. “Because you never know who might be looking.”

For more information on the Hampton Whalers, visit www.hamptonsbaseball.org.