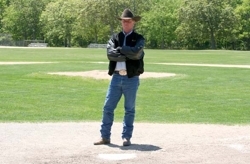 Montauk - Less than a week away from the Hampton Whalers’ Opening Day, Gardner “Rusty” Leaver is in a meeting, which leads into another meeting in another town later that day. He’s on the phone with politicians, school officials, his wife and his son, who is one of his players. The lines of communication are wide open today, they were open yesterday, and as he looks ahead to the first ever collegiate baseball team on the East End, they’ll be open tomorrow, too.

“It reminds me of doing the concert,” Leaver said, referring to the Back To The Ranch concerts he arranged for 10 years at Deep Hollow Ranch in Montauk. “I never dwelled on how much work it was because I enjoyed the day. It’s a lot like a war plan. There are a lot of tedious details, but that’s not to say it’s not uplifting when you’re joined by real quality people with big hearts.”

The Whalers’ 40-game schedule as part of the Atlantic Collegiate Baseball League (ACBL), made up of teams from New York, New Jersey and Pennsylvania, and begins with a road doubleheader against the Lehigh Valley Catz on June 7. The Hampton Whalers kick off their home schedule three days later against the Long Island Mustangs at Southampton High, with teams from Sag Harbor’s Mashashimuet Park and the Whalers’ turf. Their roster consists primarily of collegiate freshmen and sophomores playing in the northeast, including Leaver’s son, Gardner, a former star at East Hampton High School and current reliever at the University of Rhode Island. Among the top talent is Brian Butera, a sweet-swinging infielder from Boston College, and second baseman Kyle Walker, the top home run and RBI producer for Division II C.W. Post.

The Hampton squad, which will be managed by St. John's University Assistant Coach Julio Vega, is only one part of Leaver’s master plan, which includes the construction of the Hamptons Collegiate Baseball League, an organization exclusive to the region that will begin play in 2009. He mentioned that Southold, Riverhead, Westhampton Beach and East Hampton are possible stations for other squads, joining Sag Harbor and Southampton. This year, Leaver and his colleagues had to woo 25 players to the East End for the summertime; if all goes to plan, they’ll need to bring in 125 for the 2009 season beginning in August. Part of the process includes inviting head coaches out for visits this summer, as well as Major League scouts to lend credibility to the budding league.

Leaver has patterned his league’s structure after the oldest and most prestigious league in the National Alliance of Summer Baseball – the Cape Cod Baseball League. The CCBL has attracted blue-chip talent to the southeast region of Massachusetts since it was founded in 1885. Its alumni reads like a who’s who of Major League talent, past and present – Hall of Famers Pie Traynor and Mickey Cochrane, Yankee legends Red Rolfe and Thurman Munson, as well as 2007 National League Rookie of the Year Ryan Braun – all have used the Cape League as a springboard to stardom.

The ACBL, which has existed since 1967, has its own list of graduates who have excelled in the big leagues, including Frank Viola, Craig Biggio and Jamie Moyer. Leaver nevertheless isn’t banking on competing head-to-head with the league farther north just yet.

However, like the Cape, the Whalers will be swinging wooden bats. They will get paid not for baseball but for labor they might perform at local businesses. The player pool will be limited to college freshmen, sophomores and juniors with NCAA eligibility standing. The majority of its games, which are free to the public, will be played on local high school fields.

“It’s funny how similar [Cape Cod] is to the Hamptons,” Leaver said. “I thought ‘why can’t we have this slice of Americana?’ They have a high level of talent, but at the same time, it’s very local, it’s folksy, and it has hometown entertainment value. You couldn’t have a better template.”

The local community has embraced the project. Businesses and individuals have come forward to sponsor the team and the league. Rawlings, one of the game’s foremost names dating back to the 19th century, donated 100 percent of the equipment to be used by the Whalers. Three local gyms have welcomed players to work out at no cost. An East End sports medicine expert agreed to oversee medical treatment of the players. For the 2008 season, Leaver has also discussed field improvements such as bullpens and electricity with officials in Sag Harbor and Southampton.

A wealth of people have also donated hours of time to help build up the team in preparation for Opening Day and far beyond that. Chris Price, author of Baseball by the Beach: A History of America's National Pastime on Cape Cod, said the community effort in Massachusetts is as much a part of the league as its talent.

"The biggest key to the success of the Cape League hasn't been the players, but the small army of volunteers they have," Price said. "From people willing to put the players up in their homes for the summer, to the families that work at the concession stands to the kid who sweeps out the press box after every game, they have been able to get thousands of volunteers to keep the whole thing running year after year."

“What that says to me is that it may be the Hamptons and it may have all that cache, but at the end of the day, it’s just a series of small towns who have grasped this at the grass-roots level," Leaver said.

Soon enough, the Hampton Whalers will take the diamond. Ordinarily dormant baseball fields will foster the careers of, at least for this season, a couple dozen promising players. Crowds will drop by to see what all the buzz is about. Silence, almost sacrilegious on baseball diamonds come the summertime, will be replaced by cheers from the hometown folks. Leaver, though, won’t be able to put his feet up and relax anytime soon. His work’s only just begun.

“I don’t know how much sitting I’ll do,” Leaver said. “With the Back To The Ranch concerts, I never recall that moment when I sat back and took it in. There will be some satisfaction. It certainly will be satisfying when I actually see it on the field taking place. I’m looking forward to going to the game and enjoying them, but I think I’ll still be in work mode.”