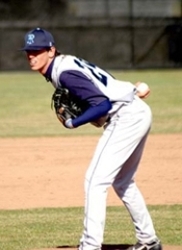 On Cape Cod during the summertime, a family can pack up a lunch and a blanket and go to one of the many baseball fields there to watch some of America's top players. The Cape leagues have bred players like Nomar Garciaparra and Jason Varitek. Tickets to games do not cost $200 a piece for good seats and a hot dog isn't $7. The rivalries and the games played, however, are intense and the fans are serious. Collegiate baseball on Cape Cod has a reputation for producing major league players. The games draw hundreds, sometimes thousands, of people, and the players and the young people who follow them there become an important part of the fabric of the wealthy tourist area.

Here in the Hamptons, we don't have collegiate baseball - yet. But there's a guy in Montauk who's working on it, and his name is Rusty Leaver. Leaver is the man behind Montauk's Deep Hollow Ranch, the oldest cattle ranch in America, and he has an eye for entertainment that is fun and family oriented. In Montauk he's known for his "Living History Cattle Rides." On these events, folks ride on an old-fashioned horse-drawn wagon through the trails of his ranch for a show that features actors portraying significant American historical figures such as Theodore Roosevelt. Leaver does his rides all summer long and they're very popular and entertaining.

Leaver's vision this year is not about his ranch. It's about baseball. He has a passion for the sport and has noticed that the Hamptons is lacking a professional sports venue that's open to the entire public. Leaver also has seen firsthand the success of the baseball leagues in Cape Cod and is completely confident that he can pull off the same feat in the Hamptons.

He was happy to learn that Long Island already has a league of this type called Long Island's Atlantic College Baseball League and wanted the Hamptons to be a part of it.

And so, this year he has created a Hamptons team for Long Island's Atlantic College Baseball League, and is working out every little detail, right down to the popcorn and Cracker Jacks. Commissioner Ralph Addonizio of the ACBL is welcoming the new Hamptons team with open arms and can't wait to get the season started. That season will have its opening game just three weeks from the time you are reading this article.

Leaver loves baseball (and so does his son, who has had a college career as a pitcher), and he wants to bring that spirit and that excitement to everyone in the Hamptons. And he's not messing around. He has garnered the support of nearly every East End media outlet, business and politician and has drawn up a plan that includes six teams to play against each other in the Hamptons. Those six teams so far include players from the University of Wilmington, Rice University, the University of Rhode Island, Lafayette and Youngstown University. "It's gonna be great," Leaver said. "People are already talking about it."

Leaver's team, which he lovingly calls The Hampton Whalers, has some very impressive people behind them. Ready to swing their bats this season at the ball field at Mashashimuet Park in Sag Harbor and the Southampton High School field, the Whalers have an impressive roster that includes players from Louisiana, North Carolina and Texas, including Division I, II and III players, as well as NAIA players. The general manager and director of baseball operation are Michael "Butch" Caulfield and Julio Vega, a former San Francisco Giants outfielder. Currently, a St. Johns Assistant Coach is the field manager for the Whalers, and East Hampton High School Varsity head coach Ed Bahns, as well as Joe Short, the assistant coach at Molloy College, are also involved.

Leaver has even set up a state of the art website for the team - liwhales.com -where you can check for game schedules, player stats and photos of the games. The Whalers will be facing off against teams within the ACBL such as the Long Island Stars, the Nassau Collegians and the New York Generals.

Although housing is almost always an issue for just about anyone moving to the Hamptons, Leaver is making sure that his Whalers have some very nice homes to stay in. In fact, through a volunteer housing program, Hamptons homeowners have offered players lodging for the summer so that they don't have to worry about rent and can focus on winning baseball games. This is a key example of how the community is supporting the idea of bringing collegiate baseball to the Hamptons and doing their part in helping it succeed.

So if baseball is in your blood, you'll have some very exciting live games to go to this summer, and if you see Leaver on the field strategizing while chewing on some bubble gum, give him a tip of the hat. This is one person who is committed to follow through, giving the Hamptons something else to be proud of.