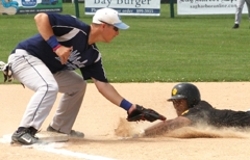 Montauk - It’s December, days after Thanksgiving, weeks before Christmas, and Rusty Leaver is busy thinking about baseball. This month’s agenda looks eerily similar to November’s, October’s, even September’s - wake up bright and early, hit the phones, hit the road and piece this thing together. The truth is, when last year’s Whalers team took the field for the 2008 Atlantic Collegiate Baseball League championship game, Leaver was already ear-deep in plans for the 2009 campaign. Expansion was central among his concerns, and after negotiations with villages and towns on the North and South Forks, Hamptons Collegiate Baseball (HCB) is set for play to begin in early June.

The day-and-night love affair to bring top-flight ball to the East End began long ago, and it won’t soon cease.

“This may be The Hamptons, which has a posh Rodeo Drive image, but this is an idea that accentuates the Iowa in the Hamptons, the small-town nature of what we really are,” Hamptons Collegiate Baseball President Rusty Leaver said, characterizing the campaign. “We want the East End of Long Island to become synonymous with where future stars got their starts.”

Of the five East End squads, two have confirmed nicknames - the Sag Harbor Whalers and the Southampton Breakers. Current proposals have the Riverhead team likely to be called the “Tomcats” and the Westhampton franchise to be known as the “Airmen.” The North Fork committee is currently batting around half-a-dozen proposed mascots, whose short list will likely include the “Ospreys” and the “Anglers.”

Additionally, the Long Island Mustangs, a Kaiser Division team that has historically called Hofstra University its home, may relocate to Stony Brook University’s main campus under the guidance of owner Phil Pursino. The South Bay Battlecats, who are based out of Center Moriches, have expressed interest in joining the league as well, although that wouldn’t become a possibility until the summer of 2010.

The six teams in HCB make up one-half of the Pennsylvania-based ACBL (All Collegiate Baseball League), in which last year’s flagship team, the Hampton Whalers roared back to win the Kaiser Division before eventually falling in the league championship game. Like last year, the victors from the east will meet the western champ to settle ACBL supremacy.

But who would make up these teams? Last year, New York Tech Assistant Coach Mike “Butch” Caulfield brought in roughly 25 kids to make up the Whalers; this year’s task of putting together five teams was far more challenging. In September, Leaver appointed Dan Gallagher, who won more than 500 games as the head coach at Fordham and currently an associate scout for the Philadelphia Phillies, to spearhead the recruiting process. With the help of his son-in-law, Dave Walker, a Long Island baseball mogul who is also the father of former Whalers Kyle and Chris Walker, approximately 95 players - or two-thirds of the rosters - have been signed to contracts as of Wednesday. Thirty others have been extended the necessary paperwork, with dozens of players on the hold list. A large percentage of those enrolled in Hamptons Collegiate Baseball hail from Division I schools and on Major League scouts’ follow lists. Among them are: