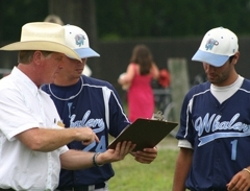 Many fans across the East End enjoyed their first taste of collegiate baseball last summer, as they lined fields in both Sag Harbor and Southampton to watch the Hampton Whalers clinch a postseason berth and a trip to the championship game in their first season in the Atlantic Collegiate Baseball League.

The team was made up of collegiate baseball players from across the country who lived in the area with host families while keeping their skills sharp in the offseason.

Whalers team president Rusty Leaver of Montauk said he had visions of starting his own collegiate baseball league regardless of how well the Whalers performed last season, and now it seems as if his vision will come to fruition.

Leaver will be heading up a new division in the ACBL, which will essentially take over the Kaiser Division, the division the Whalers played in last season. The new division will be named the Hamptons Division, and the Whalers will now call Sag Harbor their sole home. Three teams will be based in Southampton, Westhampton Beach and Riverhead. There will also be a new North Fork team, splitting time between Southold and Mattituck. The Long Island Mustangs, who are based at Hofstra University and competed in the Kaiser Division last year, will join the five East End teams.

Leaver said that it was very important that a new division was up to the standards of leagues such as the ACBL and the well-known Cape Cod League, which attracts the best young players in the country every summer. Attaching the new division to the ACBL rather than creating a brand new league—which was the original plan—gave Leaver and his partners the ability to do that.

“It was very important to us to be sanctioned by Major League Baseball and the NCAA, which follows strict guidelines,” he said. “It’s good to have that structure. It’s possible in the future to have our own league.”

Leaver added that two other towns, which he would not name, were interested in forming a team for the upcoming season, but with the limited amount of time, they were unable to take on the responsibility. Those two teams, along with a third team, the South Bay Battlecats, a collegiate travel team out of Center Moriches, could potentially be part of a new league in the summer of 2010. South Bay reportedly wants to be in the Hamptons Division this season, but that would add a seventh team and Leaver said that would create a quandary because the ACBL has only given the okay for six teams.

“They may be in one form or another playing with us,” Leaver said of the South Bay team. “They could be a non-league competitor or they could be in the division. We like them because they’re almost exclusively Long Island kids.”

“The Whalers last year were a so-so team,” he said. “They had an okay record for more than half of the season, then they exploded at the end. I’d like to have a wide range of playoff opportunities. The winner of the division would play the Wolff Division winner and we don’t want it to be just one game. We’d like to make it a best-of-three series.”

The status of the five teams from the East End is not finalized yet as some of the teams have just begun forming their town committees. Those committees handle a large amount of the responsibilities, such as finding housing for the players, finances, public relations and getting permits from their towns to use fields.

The Southampton team is slated to use the Southampton High School varsity baseball field, which the Whalers used last season. Leaver and his group are also in talks with Stony Brook Southampton to upgrade a field at that campus.

The Riverhead team is looking into the new fields, which are being developed on Route 25 in Calverton. The fields are not ready yet, but the plans call for lights, which intrigues Lever because it will bring a whole new aspect to the division, since the games last season were all played during the day.

Westhampton Beach will play its games on the new varsity fields behind the Westhampton Beach grammar and high schools. Those fields are not completely finished but are scheduled to be completed in time for the varsity season which begins in March.

One of the toughest aspects of creating the new division has been the recruiting, which Leaver said started around Labor Day and is about 95 percent complete. Dan Gallagher, the former head coach at Fordham University and current associate scout for the World Champion Philadelphia Phillies, is heading up the recruiting process.

Gallagher, grandfather to former Whalers players Chris and Kyle Walker, could not go into the specifics of the type of players he and the scout team are looking for but did say almost 80 players have been signed to play on the East End next season.

The players are from universities such as Notre Dame, Cal State Fullerton, North Carolina and a number of other Division I and highly-ranked Division II schools. Leaver and Gallagher are looking for at least 100 players to fill out the division, but Gallagher thinks that could be a stretch.

“Naturally, some players have been lost due to injury already,” Gallagher explained. “Some of the players want to say home or have to because of summer school. Sometimes we have to start the process all over again, and you really don’t want to overload the amount of players you want to have. You don’t want to have too many first basemen and not enough pitching. You have to fill the whole thing out in essence, so when you fill the teams they’re not lopsided.”

One of Leaver’s biggest tasks has been creating town committees for each team. While most towns already have committees in place, Westhampton Beach is in the infant stages with its committee. Bill Ciraco, a 1987 graduate of Westhampton Beach High School and a former varsity pitcher, was at the forefront of the village’s meeting last week, along with Leaver, his associates, and Westhampton Beach head baseball coach Terry Moran and athletic director Kathy Masterson. Ciraco also played in college at Brown University, and during the summer months while he was home he used to play on a collegiate travel team called the East End Knights that was based in Laurel.

“I always wished we had a league like the Cape League,” he said. “We have nice towns, there are great sports rivalries between villages. We just never had the opportunity to move on it. Westhampton Beach would be an ideal place for an additional team.”

Ciraco said that the most pressing need is to find someone from the community to serve as general manager of the team.

Leaver said that the next couple of weeks will be important because the organizers will be finishing the recruitment process, getting agreements to use fields and bringing town committees up to speed. After that, Leaver will leave the individual aspects of the teams, such as the housing for the players, finding part-time jobs for them, and coming up with team names and logos to the town committees.

“We like the feeling at the end of the day that each town feels it’s their team,” he said. “We need to develop this as a cohesive division with equity and parity between the teams.”

Leaver expects this season to be fun and exciting. Travel expenses will be down almost $15,000 because the teams will not have to travel as far as New Jersey and Pennsylvania. Also, players will have a better chance at having good part-time jobs because of the limited traveling. Last season, players were on the road so much that it limited their ability to work. This season, players can work until about 3 p.m. and still get to the field for a 5 or 7 p.m. start.

Leaver said that it was always something he wanted to have on the East End; a free, family fun experience that brought entertaining and competitive baseball to the area.

“I had my vision when we had one team to test the waters,” he said. “If it works with one team, it should work all over.”

“I saw what the Cape League meant to its surrounding areas and I said sign me up for making that happen,” he continued. “What a great thing it is to have big-league talent in a small town atmosphere, helping kids trying to make it to the major leagues. To me it’s like ice cream, everyone’s going to like this and what we did last year, it reinforced my idea 100 percent.”

Those interested in getting involved with Hamptons Baseball can contact Rusty Leaver at (631) 668-3901 or e-mail him at RLeaver@hamptonsbaseball.org.