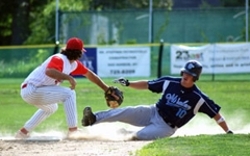 A full plate of baseball is in store for East End residents and visitors alike this summer.

Six teams will fill out the new Kaiser/Hamptons Division of the Atlantic Collegiate Baseball League.

The Westhampton Airmen, Southampton Breakers, Sag Harbor Whalers, North Forth Osprey and Riverhead Tomcats will join the Long Island Mustangs, an original team from the ACBL Kaiser Division, in the new division.

The division is named after Jack Kaiser, an All-American college baseball player, Hall of Fame coach and one of the founding fathers of the Big East Conference in NCAA baseball. Kaiser played an integral role in making the St. John’s University baseball program what it is today, one of the most successful programs on the east coast. St. John’s University was home to the Metro NY Cadets in the ACBL last season.

League president Rusty Leaver said town committees in each community played a major role in expanding the league. The committees essentially run the team from the ground up. While Sag Harbor has had its committee in place since last season when it fielded the Hampton Whalers, the new teams have had to form their own committees in a short period of time.

Leaver said last week that the Riverhead, North Fork and Southampton committees have been coming along while the Westhampton committee was a bit slow in forming until Leaver and his staff met last week with members of the Westhampton Chamber of Commerce at Finn McCool’s. Before the meeting, Westhampton had two members, ?Henry Bramwell and Bill Ciraco. Now, the committee consists of about 10 members and a number of people continue to call and pledge their support in any way they can, according to Bramwell.

“The community support has been overwhelming,” he said. “People have joined up for housing, game-day operations. We have dozens and dozens who have placed their support by taking ads out.”

The Westhampton Airmen organization got word earlier this winter that Dan Gallagher, former baseball coach at Fordham University, will be the team’s head coach this summer. Dave Walker, who Gallagher coached in college, according to Leaver, will be an assistant coach on the team. Walker is known for his success with elite college travel teams from around the country and is also the father of former Hampton Whaler players Chris and Kyle Walker.

The Airmen will play their games on the new varsity fields behind the Westhampton Beach High School. Donating his time and effort to the Westhampton Beach cause, contractor Tom Lettieri of Lettieri Construction will build state-of-the-art dugouts on the new fields designed by architect Bill Mitchell of William R. Mitchell Architects. While the field is not done yet, construction is slated to be completed in time for the high school season in March.

Just a few months ago, Leaver and his team of scouts were looking to fill the new division with about 125 players (25 players on each team). Leaver said last week that 120 players are currently under contract with the rest of the players most likely to be signed by late May just before the season starts on June 1. The reason why the league is waiting to fill out the division, Leaver said, is because some players that are currently signed will start to drop out because of poor grades in school or injuries. In May, after the Major League Baseball first-year player draft, players will begin the process of signing with the team that drafted them. Sometimes players do not sign with that initial team but decide to keep playing college ball. Those are the type of players Leaver is waiting on to fill out the league.

“We are well positioned with much of the schools to get some of these draft picks,” he said. “A lot of the guys we already have now are future draft picks.”

The players will not be placed on their respective summer teams until close to the beginning of the season, said Leaver, because he and his team of scouts want to assess how the freshmen adjust to the college baseball game.

Leaver just recently signed a deal with Dana Cavalea, head of strength and conditioning for the New York Yankees, to be in the same capacity with Hamptons Collegiate Baseball. He will overlook all training aspects of the new teams on the East End.

“With Dana, we’re really separating ourselves from other collegiate leagues for being a true development center,” Leaver said. “So we will be exposing these college players to the same programs that Cavalea brings to the Yankees.”

Leaver and his staff also met with the New York Mets a few weeks ago and will meet with the Yankees this week to create an alliance with the two major league teams to hopefully build, what he called a “feeder” system, to the major leagues. Leaver said that he was “greeted with open arms” by Mets top officials and is looking forward to the same type of greeting by the Yankees. “We’re looking to create a similar relationship between the Red Sox and the Cape Cod League,” he said. “These are just the beginning of the ways we will work with the Mets and Yankees.”

While Leaver and his staff have been working diligently, he says there is still much to be done. Right now the biggest need is for host committees to house the players, the players’ parents when they come to visit and major league scouts who will continually pass through the East End to take a look at prospects.

“The host committees will help get golf tee times, travel plans in any way shape or form,” he explained. “We’re going to be very gracious on how we roll out the carpet for these people.”

Those interested in getting involved with Hamptons Baseball can contact Rusty Leaver at (631) 668-3901 or e-mail him at RLeaver@hamptonsbaseball.org.