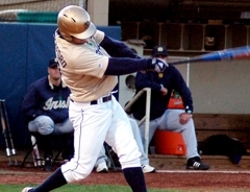 Southampton - The second year of Hamptons Collegiate Baseball (HCB) is just more than two months away, and work on one of the project's key cogs - a revamped baseball facility at Stony Brook University's Southampton Campus - will begin on Thursday, April 2 with a groundbreaking ceremony at 230p.

The permit to begin renovating the terrain in the northeast corner of campus was obtained in early March.  HCB President Rusty Leaver and the college hired four local contracting companies that agreed to construct the field, complete with backstops, drainage systems, bullpen mounds and many other amenities at cost.

"All of us involved with Hamptons Collegiate Baseball, which has become truly an extended family of people from the South Fork around to the North Fork, are all very enthusiastic about the groundbreaking,” Leaver said. “We will be constructing a baseball field that will be consistent with the quality of any NCAA Division I field.”

The facility will serve as home base for the first-year Southampton Breakers, but that’s not all. At the field, Leaver has held initial discussions to host a celebrity softball fundraiser, hold youth clinics, as well as host the likes of Team USA and Cape Cod Baseball League teams for exhibition games.

“We’re very excited about the relationship that we have with Stony Brook University that will allow us to bring our brand of free family entertainment not only to Southampton with the construction of this field but to have it serve as the centerpiece for the Hamptons Collegiate Baseball project.”

More than 100 ballplayers from roughly 70 universities across the country will make their way to the Hamptons for the summer. Among the contingent are players from Notre Dame, Stanford, Maryland, Northwestern and St. John’s. The season will begin play in the first week of June with playoffs scheduled for early to mid-August.

The Southampton campus might not be the only plot of land experiencing a makeover. The town board in Southold has expressed interest in extending the fences and installing lighting at Jean W. Cochran Park, at which the newly formed North Fork Ospreys will play some of their home games. The Ospreys’ other contests will be held at Mattituck High School. Last July, Cochran Park played host to an exhibition under the lights between the flagship Hampton Whalers (now Sag Harbor) and the South Bay Battlecats.

Leaver also revealed that plans to play The Ferryboat Series - a three-game series between the Ospreys and Whalers on Shelter Island - this summer have been discussed.