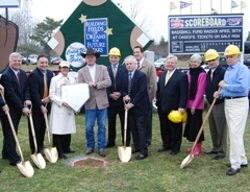 Local politicians, businessmen and fans of Hamptons Collegiate Baseball gathered at the northeast corner of the Stony Brook Southampton campus Thursday afternoon for the ground breaking of a new baseball field that will be home to the Southampton Breakers, one of four new teams on the East End that will be competing in the new Kaiser/Hamptons Division of the Atlantic Collegiate Baseball League.

The field will also serve as the center of the HCB project, hosting various clinics for children and college players this summer. And Stony Brook Southampton students aill have access to the field when it is not in use by HCB.

HCB president Rusty Leaver was very happy with the approximately 80 people who showed up for the ground breaking.

“I think the turnout is inspiring,” he said. “You know, we have a lot of local people that are interested in the project and again we have great media sponsors, great sponsors, great elected officials and in general it was just a tremendous turnout.”

Leaver said the new field should be completed by June 1.

“Oh, this is awesome, this is awesome,” said Skip Norsic, of Emil Norsic and Son Inc. in Southampton, the general manager of the new Breakers team. “Stony Brook has been great about letting us use the field and the local support that we’ve gotten with people, business people, whether they’ve contributed their time or performed work at costs, you know, it’s been great and I really want to thank all of those companies that have done that.”

The original plan for the Breakers was to use the varsity baseball field at Southampton High School, which was renovated last season so the Hampton Whalers could use it sporadically last summer. While the team would have used that field again this season had the plans at Stony Brook Southampton fallen through, Norsic is happy to have a new field, which will be located right off the highway.

“Last year, you had to park in a medical building parking lot and walk through hedges to get to the field. Nobody even knew where it was,” he explained, referring to the Southampton High School field. “I mean, here, I don’t know how many cars go past this a day, parking is great and, you know, I think it’s going to be great for a family to bring their kids here and just bring a blanket and hang out on the field. So I’m excited about it and really looking forward to it.”

Delegates from all over Long Island were in attendance at the ceremony Thursday. Dean and Administrative Vice President of Stony Brook Southampton Mary C. Pearl opened the event, thanking everyone for their support, and admitted she had been a huge fan of the Cape Cod League, a longtime collegiate baseball league in the New England area, but will now turn her attention to the new home team, the Breakers. State assemblymen Fred W. Thiele Jr. and Marc Alessi were also part of the ceremony and Alessi announced that the state would be granting $250,000 for facility usage for HCB.

“I have been pleased to work with Marc Alessi and Senator [Kenneth] La Valle on the state level to try and assist with this,” Thiele said. “Of course, having one of the teams at home here at SUNY Stony Brook Southampton is something we’re very proud of. I do want to wish good luck and welcome Mary Pearl. A lot of us spent a lot of time and effort making sure that this college would be around for posterity and this baseball program is a part of that but we can now put our dream in your capable hands and we wish you the best of luck.”

Head of Major League Baseball scouting Pat Short was also in attendance, as was the head scout for the New York Mets, Larry Izzo.

According to Leaver, players in the Kaiser/Hamptons Division will come to the new field on Mondays and work with coaches and former major leaguers.

“This league really is a player development league,” he said, adding that “as such we hope to take players in that are on their way to the majors and actually improve them with analysis and great instruction.”