Hamptons Collegiate Baseball Builds Its Own Field Of Dreams 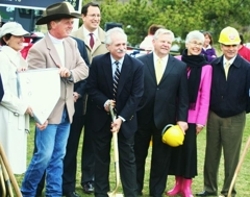 Southampton - At Thursday’s historic groundbreaking for the new Hamptons Collegiate Baseball field to be constructed at Stony Brook Southampton this spring, roughly 75 government officials, league officials, sponsors and community members huddled around the only piece of the field to make an appearance - home plate. The rest they could imagine with relative ease - the infield dirt, the dugouts, the sound of the crack of the bat.

About a dozen of those who made the field a reality pushed gold-painted shovels into the ground to mark the beginning of a two-month long process in which the knoll at the northeast corner of the campus will be transformed into the home for the Southampton Breakers, one of four new baseball teams set to begin play this summer, and become the “centerpiece” of the project.

“When I look out there and squint, I see somebody playing second and somebody on short,” Rusty Leaver said. “To me it’s a baseball field already. We’ll be on a rapid schedule to deliver but with the help of local contractors who are here, the general support and a little crazy planning, we’ll be ready to go by June.”

The enthusiasm for the project was evident from the turnout of state and local officials who were eager to comment on the development of the league. Stony Brook Southampton Dean Dr. Mary Pearl welcomed Hamptons Collegiate Baseball to the campus and New York State Assemblymen Fred Thiele and Marc Alessi chimed in, pointing to the groundswell of interest the league is creating across the state. Assistant Chief Deputy County Executive Ben Zwirn, Suffolk County Economic Development Commissioner Patrick Heaney, Southampton Town Councilman Chris Nuzzi and Southampton Town Councilwoman Sally Pope, all followed suit, displaying their support of program. All told, roughly 75 people were on hand for the ceremony.

“When I was first presented with this plan, it was truly unique,” Alessi said. “The South Fork and the North Fork, we have so much to offer. We have a very unique local community that is not usually exposed. Those that live here year-round really know that we can really offer a lot to these collegiate players who come here and want to get that small-town feel.”

“I knew what a great thing it would be if we could replicate [the Cape Cod Baseball League] template here on the East End of Long Island,” Thiele said. “It’s great entertainment for all of us, I think it’s great for the local economy and certainly for those who get to play.”

Local contractors have already begun work on the plot of land, which will include a baseball diamond, backstop, dugouts, bullpen mounds and much more. Hamptons Collegiate Baseball, which is a division of the Atlantic Collegiate Baseball League, has slated its Opening Day for the first week of June. The Breakers will play 20 home games during the regular season, and if everything goes to plan, they’ll all be on the campus’ field from day one. Should Southampton qualify for the playoffs, the field would play host to additional games.

“The thing that we like about doing this and what we think will reverberate in the communities is the inspirational value and also of course what goes in tandem with that - players who are coming here are young collegiate athletes who have the dream and the dedication to make it to the major leagues,” Leaver said.

The North Fork Ospreys will split their home games between Mattituck High School and Cochran Park in Southold. Just west of them, the Riverhead Tomcats are set to play at Riverhead High. In Westhampton, the Aviators will wear the home whites at a brand new field behind Westhampton Beach Elementary School, while the Sag Harbor Whalers will continue to host games at Mashashimuet Park.

Pearl, the former president of the Wildlife Trust who was named dean to the Southampton campus last month, was glad to announce that efforts to minimize the ecological footprint of the construction and maintenance of the field were in place.

“I was pleased when Rusty [Leaver] told me that not only are we going to have a wonderfully improved field for our sports and baseball clinics for our students, but it’s all going to be done in the spirit of our campus which is to say only organic materials are going to be used as fertilizer in the grass,” Pearl said. “Every effort is going to be made to make sure that this field is maintained in an environmentally respectful manner.”

Skip Norsic, a chief sponsor of Hamptons Collegiate Baseball and general manager of the Breakers, envisions a wonderful experience at Stony Brook Southampton this summer.

“I think it’s going to be great for a family to bring their kids here, bring a blanket and just hang out at the field,” Norsic said. “I’m excited about it. I’m really looking forward to it.”

Leaver stressed how the Hamptons division of the ACBL will work to develop its talent in every facet of the game, both physically and mentally. He mentioned that Mondays will be designated days when the Southampton field will host one-on-one pitcher instruction. Hitters too will receive attention from former college coaches and major leaguers throughout the season.

Pat Shortt, the Northeast Scouting Supervisor for the Major League Baseball Scouting Bureau, and scouts Larry Izzo (Mets) and Cesar Presbott (Yankees) were also on hand for the groundbreaking. The trio is on the HCB’s advisory board, along with Eastern cross-checkers Paul Gibson (Mariners) and Joe Rigoli (Cardinals) as well as Matt Senk and Ed Blankmeyer, the head baseball coaches at Stony Brook and St. John’s, respectively.

“This is a true player development league,” Leaver added. “As such we hope to take players in that are on their way to the majors and actually improve them with analysis and great instruction.”