A Field Of Dreams 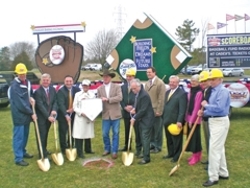 It was quite the Thursday for Rusty Leaver, owner of Montauk's historical and lovely Deep Hollow Ranch, as well as the president of Hamptons Collegiate Baseball. It's not every day you get to break ground for a new field. The Montauk local was at Stony Brook Southampton, along with more than 100 people, which included members of the press, government officials, league sponsors and small businesses, for a ground breaking ceremony that took place where a new field for the league will be constructed. For Leaver, it truly is a field of dreams.

Leaver's baseball league is modeled after Cape Cod's, which offers high-level baseball for the community. When he presented the idea, it was well received by nearly every member of the community, and just about anybody that was asked to help build the league contributed.

It's a true story of people coming together and making something great out of nothing but a vision. This league is a real testimony to the American spirit in these tough economic times.

The baseball league, which has organized teams such as the Sag Harbor Whalers, The Westhampton Aviators, The Southampton Breakers, The Riverhead Tomcats, The North Fork Ospreys and the Long Island Mustangs is foreseen as a big source of entertainment for the community and for tourists, as well as a way to stimulate economic activity and growth.

None of this would have happened if it weren't for the efforts of community leaders, business owners and delegates. Skip Norsic, of Emil Norsic and Son Inc., is one of those guys who just couldn't wait to get started with the league and has been involved from the beginning, offering housing for players, and was smiling ear to ear at the turnout of people attending the groundbreaking ceremony.

Standing proudly next to Norsic was Geoff Lynch, of the Hampton Jitney, whose buses will sport the league's logo on the sides as well as drive teams, for free, to the different games that will be played all summer long.

Nearly a dozen politicians, delegates and leaders gave their input on the league. State Assemblyman Fred Thiele was one of many leaders who spoke to excite the crowd before gold shovels were broken out to represent the first step towards building a great field. "Let me just step up to the plate," Thiele joked to the crowd as he made his speech and later added, "This is going to be great for the local economy."

The new dean of Stony Brook Southampton, Mary C. Pearl, expressed her excitement about the new field by thanking all those involved in the tough process of organizing such a large vision.

Leaver did not want to leave out the importance of how player development on Long Island can be accomplished with the league, acknowledging Pat Shortt, the Northeast scouting supervisor for Major League Baseball, as well as two major league scouts present, Larry Izzo, from the Mets, and Cesar Presbott, from the Yankees. "This league will develop players for Major League Baseball," Leaver declared with a tip of his hat.

The ceremony ended with the traditional photo of getting all those involved holding gold shovels to the ground.

As the group began to disperse, the vision of Montauk's Rusty Leaver truly became a belief for all those that attended the ground-breaking ceremony, a very difficult task to accomplish, especially when the needed funds are necessary and the political will is needed as well.

But it would appear that the Hamptons Collegiate Baseball league is for real and is here to stay.

The league is a large scale project started by a local idea, brought to fruition with a little elbow grease, a clear vision and faith.