As Seen in Baseball Player Magazine 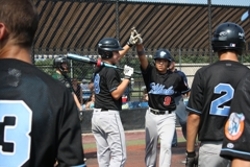 Three years ago, Brandon Kurz, a former ace pitcher for New York Institute of Technology, decided to start a travel baseball team on Long Island; only this team would be different from those that came before it.  His vision was to assemble a team providing the best coaching staff Long Island had to offer.  Kurz, a 5'9", right-handed pitcher from the North Shore of Long Island, never had the benefit of playing serious travel ball while growing up.  "I didn't know about it.  It was only when I got to college that I heard about highly competitive travel teams. I believe I would’ve been more prepared to pitch in my freshman year of college, had I known about travel baseball. I would’ve had better coaching and I would’ve seen better competition. Unfortunately, I did most of my learning (at a young age) on my own.” With that in mind, he set out to build a program that would feature top level instruction; and he knew exactly where to find such great teachers.

Enter Butch Caulfield, who is a long-time assistant coach at NYIT, Brandon's alma-mater. Butch re-joined the NYIT coaching staff in 1999, Brandon’s sophomore year. Brandon, a walk-on freshman, only pitched 13 innings his freshman year and was limited to “mop-up duty.” Once Butch joined the staff, Brandon’s career took a turn for the best, leading the team in wins from 1999-2002 with 15. Brandon had such a great experience at NYIT playing under Butch Caulfield (and Head Coach, Bob Hirschfield) that it led him to trust Butch to assemble the Long Island Whalers coaching staff. “Butch knows everyone on the island. It was a no-brainer,” said Kurz.

Although the coaching staff is impressive, there are many clubs on Long Island to choose from.  "Our staff makes us an attractive team to play for, but we are aware that there are many features that players look for in a team. We needed to add an element to our program that would help draw high caliber players ", Kurz said.  Therefore, Kurz spent most of the off-season looking for ways to build a well-rounded program.  He reached out to two more of his college teammates, Bryan and Jimmy Goelz, of Prospect Sports in Farmingdale, New York.  The Whalers now train out of Prospect Sports to better accommodate Suffolk County players.  With the move to Prospect Sports, the Whalers have been able to tap into a larger base of Suffolk County while maintaining their strong base of Nassau County talent.

The 2009 Whalers are so talented that Kurz believes the Whalers can compete with any team on the Island. “There is a buzz going around about our pitching. We are loaded with arms and our teams are well rounded. We selected our teams with great care this season. Our teams just finished our winter workouts and I believe our players are better than ever.” January tryouts saw over 250 players try out for limited spots on the Whalers’ teams. While many teams would have expanded the organization to accommodate as many of these players as possible, the Whalers decided to stay small.  Explains Mr. Kurz, "We think The-Few-and-the-Proud approach is better and makes for more efficient teams.” No matter how efficient the Whalers become, Kurz will never forget where he started…at NYIT as a walk-on freshman.