The Ospreys dive into their inaugural campaign 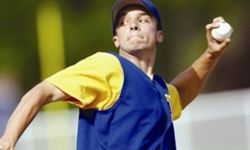 As Joe Finora Sr., general manager of the new North Fork Ospreys team in the Atlantic Collegiate Baseball League, talked about this upcoming inaugural season, one could hear the excitement, the enthusiasm, building in his voice. He talked about how this league is modeled after the Cape Cod League.

"Our team will span the North Fork," he said. "This has exploded beautifully. We will have people involved from Laurel to Orient. I couldn't be happier."

While Sean Epidenio will be the head coach of the team, Finora said a number of other local baseball people, ranging from Kyle Charters and Dan Hagerman, to Mattituck High School's baseball coach, Steve De Caro, will also be involved in various capacities. Brian Hansen will be the Ospreys' assistant coach.

The Ospreys' roster will feature former Mattituck High School pitchers Joe Finora Jr. and Brian Tardif. Finora pitches for Stevens Tech, while Tardif is a lefty for Monmouth. Players, primarily freshmen and sophomores in college, along with a few juniors, are coming to the North Fork from as far away as California, North Carolina, New Jersey and New England to be part of the team.

Finora Sr. pointed out the positive economic impact the league can have for the local community. Patrick Corrigan, an analyst for Chartered Financial, echoed those thoughts.

"Summer baseball is as American as hot dogs and apple pie," Corrigan said. "This league is similar to the Cape Cod League in Massachusetts, near¬ where I grew up. A new¬ league on¬ eastern Long Island¬ will provide¬ a boost to the local economy.¬ Why?¬ The economic concept is known as complementary products.¬ Baseball is an entertainment product and is complementary to many other¬ product sales,¬ not just¬ hot dogs and apple pie.¬ Local merchants can only benefit from this type of¬ wholesome, family-oriented activity.¬ Let's assume 1,000 people come to watch games this summer.¬ Many of those people will buy a lot more than hot¬ dogs and apple pie.¬ Many will pay for lodging, gas, dinner and drinks, visit a local winery or food stand, etc.¬ Between that and the roughly 20 players staying at sponsors' homes for the summer, the league could easily add $50,000 to $100,000 to the local economy."

Finora Sr. said local hotels are getting five to 10 calls a day for rooms.

The Ospreys will open the season at home on June 4 against the Riverhead Tomcats at the newly renovated Mattituck High School field. Finora Sr. is excited about the additions to the field.

"We have added things like electricity for a public address system and two bullpen pitching mounds," he said. "We've got temporary dugouts and we are working on having permanent dugouts. The physical improvements to the field will give us an exciting home field to play at."

The Ospreys will play nine of their 20 home games at Jean W. Cochran Park in Peconic.

"The North Fork is getting a good, representative product," he said. "There are some very good baseball players in this league. There are six players from Mattituck and Southold playing college baseball, and three of them are playing in Division I. This league is going to give the community good, competitive baseball for free."

The Ospreys are still looking for a couple of more host families to house their players this summer. Anyone interested in providing housing may contact Joe Finora Sr. at 631-680-7870 or at jfinora@optonline.net.