Ospreys Prepare To Spread Their Wings! 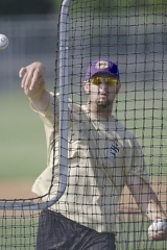 After all the talk, all the planning, all the organizing, and all the traveling, it was finally time for baseball. Time for catching, hitting, running and throwing. Players like catcher Adam Clear, who will be a red-shirt freshman at the University of San Francisco, didn't have to be coaxed into joining the Ospreys when they were recruited. After the Ospreys posed for individual and team photos, they finally went about the actual business of baseball on Tuesday, stretching out, jogging, hitting some balls and playing catch.

Baseball's version of "meet the new neighbors" played out Tuesday when the North Fork Ospreys, new entrants in the Atlantic Collegiate Baseball League, held their first practice. The Ospreys, many of whom met for the first time at a team orientation the night before, arrived at the practice at Jean W. Cochran Park in Peconic decked out in their sharp purple and gold uniforms.

Twenty-two college players -- and a manager -- from various parts of the country converged in the Town of Southold within the previous two days. For many who had never been on Long Island before, it was an eye-opening experience.

The Ospreys have a lot to do in a short time period, with only two practices scheduled before their season-opener today against another first-year team, the Riverhead Tomcats, at [ATTENTION: VENUE HAS CHANGED from Mattituck High School to Cochran Park in Peconic at 5 p.m.]. It will be the first of 40 scheduled games for the Ospreys, who will also play some of their home games at Jean W. Cochran Park. Those teams will compete in the league's Kaiser Division along with the Long Island Mustangs, Sag Harbor Whalers, Southampton Breakers and Westhampton Aviators.

"It's exciting to be out here," said Manager Shawn Epidendio, who is an assistant coach at Santa Clara University (Calif.). "It's a great opportunity for myself and some of these players to be part of something that's so brand new. They're on the cutting edge, and trying to do things right out here, so it's exciting to see."

Epidendio may have the toughest job of anyone on the team. Aside from a couple of players from the University of California at Davis, outfielder Danny Cepin and pitcher Anthony Kupens, all the other players are new to him. Epidendio said he has spoken to a number of the players' college coaches in order to get an idea of what he has to work with, but he will be spending a good deal of time in the beginning of the season, along with his assistant coach, Brian Hansen, learning about the players.

The area is new to virtually all of the Ospreys, except for at least two of them. Two pitchers, Brian Tardif of Cutchogue and Joe Finora of Mattituck, both played for Mattituck High School. Tardif, who is transferring from Monmouth College (N.J.), will be a red-shirt freshman for C.W. Post College, and Finora is a junior at Stevens Tech (N.J.).

"It's weird," Tardif, a hard-throwing left-hander, said while waiting for his photo to be taken before practice. "I thought I was done playing in Mattituck and around here."

Tardif said going from high school to college baseball is a big jump. He learned that what worked in high school doesn't necessarily work in college.

"In high school, you can kind of just blow everybody away, but in college that's not going to work at all," he said. "You have to be smart. You have to know what you're doing."

The Ospreys will be busy, playing games five days a week, including doubleheaders on some days. "It's a lot of games," Epidendio said. "It's more like playing in the minor leagues. The grind is probably the biggest thing for them."

Daniel Etienne, a sophomore pitcher from Southern Illinois University, has the advantage of knowing at least one of his teammates. Another member of the Salukis, third baseman Tony Lepore, is also playing for the Ospreys.

"It should be interesting," Etienne said of the summer season. "I really just hope that we have a good year. I really don't care much about myself and how I do. I just want our team to do pretty good."

One of the aims of the league is to give the players a platform on which to show their skills to pro scouts.

"Leagues like this can really help because you get to play against guys on other teams in other conferences that you normally wouldn't get to see, and it's kind of a better way to judge your ability," said Josh Smith, a pitcher from North Dakota State. "It really gives you a large opportunity to see what you can do."

Not only that, but it should be good, plain fun. Etienne said, "Playing baseball every day, that's not a bad way to spend your summer."