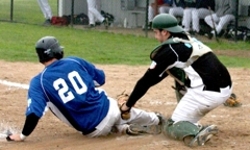 With the game knotted at 3 in the seventh inning, Sag Harbor's Mike Labrozzi (Farmingdale State) looped a fly ball to center field that went into the book as a three-run double, keying the Whalers' 7-3 win in Southampton on Thursday night in a game that was called in the bottom of the eighth due to foggy conditions.

Labrozzi, a Sag Harbor native, belted the ball high and deep to center with two outs and the bases loaded. Southampton center fielder Tom Boggiano (Princeton) tracked the ball through the fog but slipped on the grass, allowing Labrozzi's shot to drop. The double cleared the bases and gave the Whalers (3-1) the lead for good. His three RBI tied him with Quakertown's Nate Theunissen for the ACBL lead with seven. Labrozzi holds the sole lead in hits with nine through four games.

Steve King (Farmingdale State) earned the win for Sag Harbor, going three innings without giving up an earned run, striking out five. Nick Laude (Bryant) helped secure the victory by pitching a scoreless seventh but not without drama. Making his first appearance this season, Laude loaded the bases with nobody out but then proceeded to strike out the side.

The Whalers' Brandon Boykin (Rutgers) doubled, tripled and was hit by a pitch in four plate appearances. For the Breakers, Dan Haverstick (Rhode Island) and Logan Welch (Maryland) each had multi-hit games.