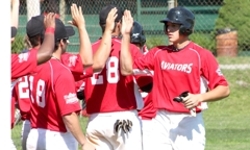 Runs were at a premium on Sunday afternoon at Mashashimuet Park, but clutch hitting from both the Westhampton Aviators and Sag Harbor Whalers yielded a doubleheader split.

In game one, Westhampton, which entered the day averaging better than 10 runs a game, was shut down by the Whalers' Gardner Leaver (Rhode Island), who went six-plus innings of shutout ball before turning it over to the bullpen. He was matched zero for zero by Aviators righthander Justin Bradley (UNC Wilmington).

It wasn't until the eighth inning that anyone crossed the plate. Westhampton, which had a runner gunned down at the plate by Sag Harbor right fielder Kyle Zarotney (CCSU) in the seventh, put a runner at third with nobody out an inning later. Sag Harbor coach Jason Lefkowitz opted to walk the bases loaded and it looked as though the Whalers might wriggle out of trouble again when Westhampton clean-up hitter Alex Aycoth (Campbell) wrapped into a 5-2-3 double play. Runners remained second and third when Andrew Siano (Hartford) stepped up; the Hawk outfielder hammered a double to right-center that brought in the only two runs of the game.

Sag Harbor exacted revenge in game two, coming from 1-0 down to hand Westhampton its first loss of the summer. With the game knotted at one run apiece, Mike Labrozzi (Farmingdale State), a Sag Harbor native, rolled into second with a double after powering one into the left center field gap off Buddy Riggs (Caldwell). A sacrifice bunt nudged Labrozzi over to third, bringing up Stanley Fich (Stanford). Fich fought off a few pitches before rapping one back up the middle. It ricocheted off Riggs and the throw home from behind the pitcher's mound was late and wide, allowing the pinch-runner to score for the doubleheader split. The victory went to Steve King (Farmingdale State) for his scoreless effort in relief.