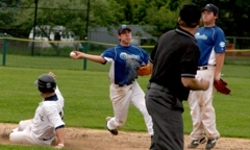 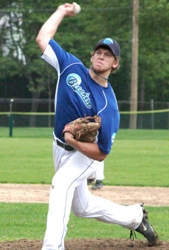 “We some great kids here," Lorraine said. “They play hard every game. We've made some mistakes, but we get through it, we're being aggressive, and the kids are having fun. That's the most important thing out here. It's fun when you win, and we're taking that approach - we want to win every game. We want to develop kids and let them get their work in, but I expect to have the chance to win every game."

Southampton has now taken all three games from the Mustangs. Despite having the largest margin of victory in their meetings, it was the only game in which the Breakers trailed. Brian Blasik made sure that didn't last long. Long Island's 3-2 edge through three innings - the Mustangs played as the home team to make an even split of eight games for the season - was wiped out when the Dayton product launched a two-run home run in the top of the fourth to put Southampton back ahead.

“They scored those three runs and went ahead, but we came right back and put the pressure on them," Lorraine said. “The home run from Brian was a big swing for us. It was right after a strike three looking and that could have been a down moment for us."

The Breakers poured it on in the seventh when Andrew Babb (Southern Connecticut State) hit a sacrifice fly to bring home E.J. Smith (Hofstra), and Tom Boggiano (Princeton) singled to left center, scoring Kyle Borden (Rhode Island). Smith had led off the inning with a single, and he was doubled over to third base by Borden. In the ninth, Smith circled the bases on his own power, deposited a Jon Costa pitch over the right field fence to match Blasik for the team lead in home runs with two. 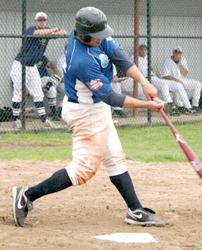 “Every game it's been someone different," Lorraine said. “I'm feeling confident with our lineup. I don't think we have the power that a lot of the other teams do, but I think we have guys with good approaches and hopefully we keep making adjustments."

Breakers starter Brett Moore (Mount St. Mary's) had all the run support he needed. The senior-to-be pitched five effective innings to record his first victory this season. Moore gave up six hits and three runs while fanning six. He left the game in the hands of Brandon Curson (Siena) and Marcus Broadwater (West Virginia); Curson went three scoreless innings to earn the win and Broadwater notched his first save of the summer by going the final two. The Mountaineer junior received a lift when Smith, Blasik and first baseman Mark Sunga (Cal State Los Angeles) turned a terrific 4-6-3 double play to close out the eighth.

“Brett did a nice job and Brandon came in and threw the ball great," Lorraine said. “He was real aggressive coming after them. Marcus hasn't thrown since the first week of the season because he had a blister so it was nice to get him out there and have him finish out the game for us."

On Saturday, the Breakers posted 6-2 and 6-4 wins to end a four-game skid. In the opener, Nick Melchiorre (Fairleigh Dickinson) tossed six innings of two-run ball (one earned) to earn the win. Blasik went 2 for 3 on the day, socking a two-run homer in the fifth to pad the Breakers' lead. Southampton also took the nightcap behind Chris Zaccherio (Sacred Heart), who gave up two runs and struck out eight over his six innings before turning it over to the pen. Singles by Jack Cleary (Maryland) in the second and fifth innings keyed the Breaker attack.