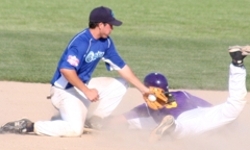 Southampton - Two weeks ago, the Southampton Breakers were outscored 42-12 over the span of four games and tied for fifth (out of six) in the Kaiser Division. They then had a week to let the swoon marinate in their minds thanks to the month's constant rainfall.

Even though they were just five games into their season, the Breakers reached a critical point. Instead of dragging their feet, they huddled up and began playing a fine brand of baseball. On Tuesday, Southampton scratched out a 3-2 win over the North Fork Ospreys, a win that catapulted the Breakers into a first-place tie with the aforementioned Ospreys, both of their records at 9-6. Both are percentage points ahead of the Riverhead Tomcats, who have won four of their last five, including a 5-3 victory at Westhampton Tuesday.

For the complete story, visit: www.hamptons.com/Sports/Hamptons-Collegiate-Baseball/8066/Breakers-Storm-Into-Three-Way-Tie-For-First-On.html