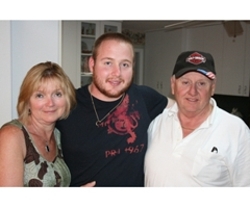 Whalers power-hitter and first baseman Mike Labrozzi admits that he sleeps with his bats and puts new ones in gym socks, but despite his quirks, the superstitious player and Sag Harbor native is one of the top hitters in Hamptons Collegiate Baseball.

Labrozzi is the only player in the Kaiser league to hit a home run out of his team’s home field, Mashashimuet Park, and he’s already logged five doubles and 13 hits this season and leads the league in both categories. He’s second in the league with nine RBIs and only three players in the division have earned more than his 21 bases this summer.

For the complete story, visit: www.27east.com/story_detail.cfm