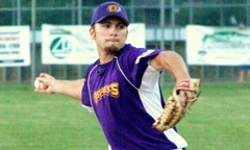 Peconic - Looking to retake first place in the Kaiser Division, the North Fork Ospreys did just that Thursday night. Right-handed starter Daniel Etienne took the mound for the first time since his seven-inning, two-hit gem against Southampton with an eight-inning three-hit performance to beat Westhampton, 2-0, on Thursday at Cochran Park.

Etienne was masterful, keeping the Aviators, who led the ACBL in runs scored entering the night, off balance throughout. The Southern Illinois product came in with a 1.12 ERA and only improved on that figure in front of a solid crowd at Cochran under the lights.

"He's staying really composed," Ospreys head coach Shawn Epidendio said. "He's not letting things get to him. He's battling. He'll fall behind hitters but he stays real composed. That's the biggest thing for him. That's why he's had so much success."

It wasn't until the ninth that Westhampton mounted a significant threat. That's when Nick Ahmed (UConn) walked and was chased to second by Chris Griffin (Iona) when his flyball to left was lost in the lights. Ospreys reliever Steve D'Angelo (Pace) reared back and struck out Alex Aycoth (Campbell) but Gerard Tingos (LIU) singled to right to load the bases. The tying run at second, D'Angelo retired the last two hitters, including Hartford's Andrew Siano by strikeout to record the save.

The North Fork bats were by no means overpowering but they nevertheless provided Etienne with ample runs with which to work. Tom Rombilus (New Haven) drove in the first run of the game with a double to right center. One batter later, Southern Illinois' Tony Lepore singled in Rombilus to make the score 2-0. North Fork didn't have a hit beyond the fifth inning but it didn't need any.

"We got those two runs with two outs, and it's always good when you can score late in the inning," Epidendio said. "It's nice to get on the board first, and Etienne kept us in the game so we didn't have to get anymore."

Justin Bradley (UNC Wilmington) took the loss for Westhampton, giving up both runs in the third but turning in an otherwise strong performance on the mound. In four starts, Bradley has given up just three earned runs.