Making A Pitch For Legendary Status 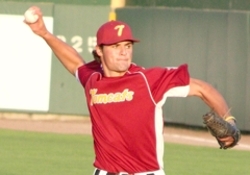 "The word 'impossible' is found only in the dictionary of fools," he said. "Anything is possible if you set your mind to it."

"My goal in life -- and this might sound corny -- is to become legendary, to be all I can be," he said. "I was born with some ability and I should fulfill my dream."

For the complete story, visit: www2.timesreview.com/NR/stories/R072309_TOMCATS_JF

Some people might consider Tropeano's comments cocky, but spend some time talking to the soon-to-be-19-year-old and he will likely impress you with his poise, maturity and plans for his future. What's also impressive is the constant love and support he gets from his family.

What is certain is during the last seven weeks he has impressed his Riverhead Tomcats teammates, Manager Ron Davies and his opponents in the Atlantic Collegiate Baseball League. Entering the final week of regular-season action, Tropeano appears the front runner to be named the 2009 Pitcher of the Year for the league's 12 teams.

Tropeano believes his exceptional pitching skills and mental toughness may one day propel him to play pro baseball and then achieve a more lofty ambition.