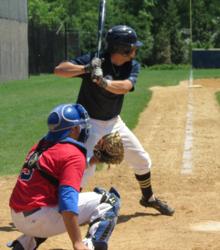 The Atlantics take game one of the doubleheader 12-4 behind the bats of Vinny Orlando (Dowling) and Brandon Fischer (Briarcliffe). Both Orlando and Fischer combined for seven runs batted in and four hits. The Atlantics' bats didn't come alive until late in the game, where they scored eight runs in the final two innings. Michael Forgione (Pace) threw three scoreless innings in relief to contribute to his team's victory. Despite their loss, the Federals' Joseph Colon (Concordia) notched two hits, drove in a run, and stole a base.

In a game far closer than the first in today’s doubleheader, the Atlantics outlasted the Federals 8-7. Although the Atlantics let up some runs early, Christian Huertas (New Paltz) came in relief and closed the door, allowing just one run and no walks in the last three innings. Leading the Atlantics bats was Brandon Fischer (Briarcliffe) who tallied three hits including a home run and game-tying RBI single in the sixth; all-in-all, he plated five runs,. In addition to Fischer, Giovanni Dingcong (St. Thomas Aquinas) went 4-4 with two runs batted in and two stolen bases. Federals' Jason Reyes went 3-3, also adding four runs batted in and a stolen base.