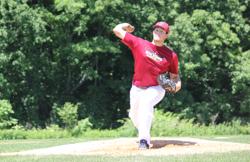 The Makos staged a three-run comeback in the final innings of Sunday’s doubleheader, but were unable to pull out a victory. With two outs in the bottom of the seventh, Ed Paredes (Briarcliffe) plunked David Hawley (Nassau) to force home Ronnie Bauer (Molloy), tying the game. However, after an error and two bunt singles loaded the bases, the Red Birds were able to win the game when Noah Shulman (Brown), who was 3-for-4 in the game, drew the game-winning walk. Josh Payne (Trinidad State) started the game for the Red Birds, and pitched five innings, giving up just two earned runs, four hits, three walks, and four strikeouts. 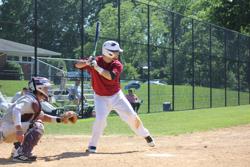 With two outs in the second inning, the Red Birds reached base eight consecutive times for a six-run rally en route to a sweep of Sunday’s double-header. Phillip Maldari (Emory) was 2-for-3 with a single, double, walk, and 4 RBIs. Chris Prete (Fairfield) also had a big game, going 2-for-4 with a single, double, walk, and three runs scored. Despite trailing 8-2, the Makos were able to fight back into the game thanks to two-hit performances by Nicholas Fronte (Skidmore) and Louis Mele (NYIT). However, with the tying-run on deck in the bottom of the seventh, Andrew Gallagher (Fairfield) came into the game and recorded the final two outs for the save, despite also giving up one RBI single.