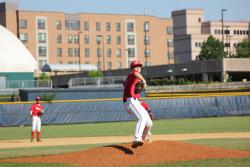 Federals 10 - Sand Sharks 4
Andrew Lombardo (Nassau) was 2-for-5 with two runs scored and three stolen bases, including a straight steal of home in Monday evening’s Federals victory over the Sand Sharks. The Feds jumped out to a 2-0 lead in the second inning on a George Cornielle (Nassau) 2 RBI single, and never trailed in the game. Kevin Cashman (Farmingdale State) pitched a solid 6 1/3 innings, giving up six hits, two walks, and two earned runs while fanning seven batters on his way to his first win of the season. Steven Longo (Mercy) was 2-for-3 with an RBI and a walk for the Sand Sharks, despite being on the losing end.