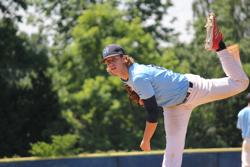 Whalers 10 – Atlantics 4
Anthony Bonilla (St. Joseph’s - LI) was 3-for-5 with 2 RBIs and a run scored as the Whalers scored six unanswered runs in the final four innings to top the Atlantics. Eight of the nine batters in the Whalers line-up had a hit, and Mark Flynn (Columbia) and Jack McCarty (Molloy) each had a pair of hits and a pair of RBIs. John Sostarich (Sacred Heart) gutted through six innings, giving up four runs on seven hits, and he fanned seven. Vinny Orlando (Dowling), Vinny DeMaria (Iona), and Brandon Fischer (Briarcliffe) each had multi-hit games for the Atlantics.