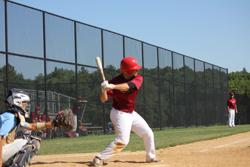 Red Birds 1 – Whalers 0
Josh Payne (Trinidad State) gave up just three hits in five scoreless innings to lower his ERA to 1.89 and pick up the victory for the Red Birds. It was Noah Shulman’s (Brown) two-out, RBI single in the fourth inning that made the difference in this game, a pitcher’s duel between Payne and the Whalers’ Chris Johnson (NYIT). Johnson gave up only five hits in five innings, but took the hard-luck loss. Andrew Gallagher (Fairfield) pitched a scoreless seventh inning for his second save of the season. Two of the Whalers’ three hits were collected by Jack McCarty (Molloy).