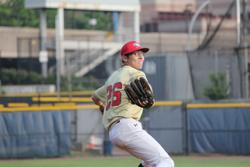 Sand Sharks 10 – Red Birds 2 (F/7)
Elijah Sanabria (Tiffin), Cameron Shaw (Brandeis), and Matt Mueller (Misericordia) each had multi-hit games, as the Sand Sharks pounded the Red Birds for a mercy-rule victory. Shaw started the scoring with a two-run single in the first inning, and Sanabria’s bases-loaded walk in the bottom of the seventh forced in the game-ending run. Pat Barrett (Briarcliffe) gave up two runs on seven hits in six innings of work to pick up his first victory of the season. The only bright spot for the Red Birds’ evening was a two-run home run by Randal Mendez (Coppin State).