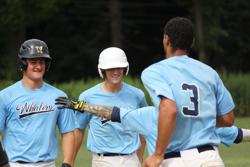 Whalers 4 – Red Birds 3
The Whalers stunned the Red Birds with a four-run seventh inning to come away with a walk-off victory in the first game of Saturday’s double-header at St. Dominic’s. With one out in the last of the seventh, Matt Taurisani’s (American International) only hit of the day brought in two runs to tie the game. The next batter, Chris Johnson (NYIT), hit a walk-off double to bring in John Tsiolis (Briarcliffe) with the winning run. Matthew Seelinger (Farmingdale State) pitched five shutout innings for the Red Birds, and Joe Mendez (St. Joseph’s College – Brooklyn) hit his fifth home run of the season, tying him with Brandon Fischer of the Atlantics for the League lead. 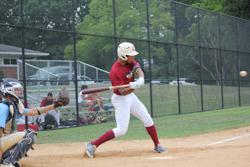 Red Birds 8 – Whalers 2
Kevin Martinez (Farmingdale State) gave up two runs on seven hits in a complete game effort to lead the Red Birds to split Saturday’s double-header against the Whalers. Skyler Mercado’s (Florence Darlington) three-run home run in the first inning was all the offense the Red Birds would need. Joe Hauer (Nassau) was 2-for-3 with a double and an RBI, and Joe Mendez (St. Joseph’s College – Brooklyn) picked up an RBI hit and scored twice. The Red Birds remain five games ahead of the Federals for the second playoff spot in the North Division, pending the Federals results from Saturday.