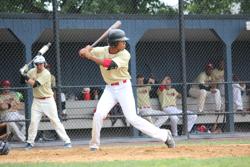 Sand Sharks 10 – Hurricanes 3
The Sand Sharks exploded for eight runs in the second inning when ten consecutive batters reached base safely. Elijah Sanabria (Tiffin) had a three-run double, and Cameron Shaw (Brandeis) was 2-for-3 with two runs scored and an RBI. Michael Falcone (Salve Regina) picked up the complete game win as he struck out five batters and gave up just three unearned runs on five hits. The Hurricanes made three errors in the field, leading to four unearned runs. 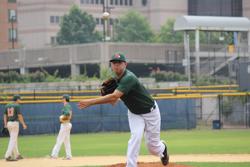 Hurricanes 4 – Sand Sharks 2
Mike Caccioppoli’s (Briarcliffe) RBI single in the fifth inning drew the Hurricanes level with the Sand Sharks, and Brian Murphy (Molloy) followed with an RBI groundout in the next at-bat to give his team a lead they would not relinquish. A wild pitch and a throwing error that allowed Aaron Traeger (Quinnipiac) to score provided insurance runs. Bobby Kelly (Molloy) pitched six innings and gave up no earned runs on eight hits for the victory. Thomas Zaki (Queens College) pitched a perfect seventh inning to pick up the save.